The image of Islam has been marred by violence and must be corrected, Iran's President Hassan Rouhani has said. In a public address, Rouhani condemned the "Islamic State" and the war in Syria. 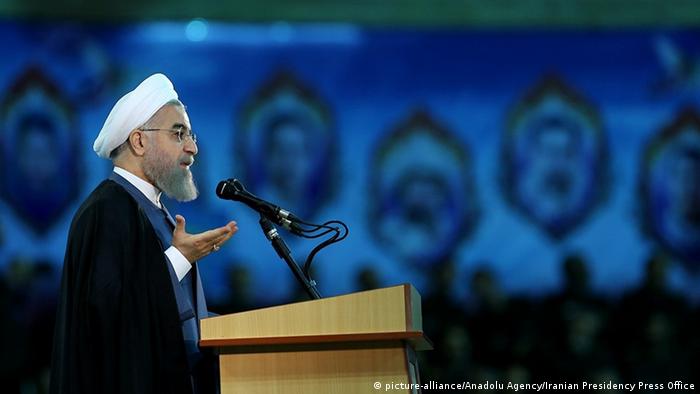 "It is our greatest duty today to correct the image of Islam in world public opinion," Rouhani told the audience at a conference in Teheran on Sunday.

Referring to atrocities committed by the terror organization "Islamic State" ("IS"), Rouhani asked: "Did we ever think that, instead of enemies, an albeit small group from the Islamic world using the language of Islam, would present it as the religion of killing, violence, whips, extortion and injustice."

"If some groups like Daesh can recruit soldiers, the reason is financial and cultural poverty," Rouhani said, referring to "IS" by its Arabic name. "Terrorism will not be destroyed by bombs," he insisted, suggesting that economic connections would foster unity within the Islamic world.

Rouhani also criticized Muslim nations for "being silent in the face of all the killing and bloodshed" in the region - including in Syria, Iraq and Yemen where Iran plays a role in the conflicts. Rouhani said the Saudi-led coalition against Yemen's Houthi rebels, who are allegedly backed by Iran, had prompted a humanitarian crisis.

Iran is a major backer of Syrian President Bashar al-Assad's government, which is battling rebels and militants of the "Islamic State" group. "IS" has occupied vast territories in Syria's north and east as well as in neighboring Iraq. In his speech on Sunday, Rouhani said that the Syria and Iraq conflicts only benefit Israel and "those who are against Muslims."

The UN Security Council has unanimously agreed on a resolution to end the war in Syria. A good first step, but not nearly enough, says DW’s Miodrag Soric. (19.12.2015)

Pentagon: US carried out Christmas Day airstrikes on 'Islamic State'

Washington has said it carried out a string of airstrikes in Syria and Iraq over the holiday. The move comes as the US and its international allies ramp up the fight against the "Islamic State." (27.12.2015)

The UN has named January 25 as the day for representatives of the Syrian regime and opposition to begin international talks aimed to end the war. Questions over the fate of Assad and rebel groups to be invited remain. (26.12.2015)