Musicians from all over the world have shared their messages of solidarity and grief after the terrible attack in Nice. DW offers a Spotify playlist of music that boldly celebrates the French way of life. 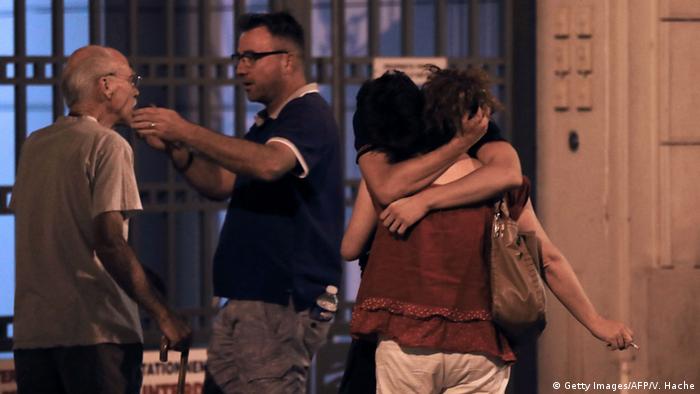 One of the most popular songs that has been shared after almost every recent attack - on the Charlie Hebdo editorial offices in January 2015, in Paris in November 2015, in Brussels in March 2016, as well as several in Turkey over the past year- is "Imagine" by John Lennon. After the attack in Nice, many are sharing the video of the song, a piano version of it, or just simply use a quote to send their message across:

Another song that is being shared by social media users is "Just Breathe" by Pearl Jam. The lyrics, such as "Yes I understand, that every life must end," seem to help people grasp the terrible attack and help others deal with their grief:

Many users have also expressed their frustration and anger about the attacks. Many are now using the hashtags #PrayfortheWorld as well as #PrayforNice to show that for them the attacks prove that humanity needs to be saved. Along with posting pictures of rainbow flags, or memes of doves and the earth surrounded by hands to show that they want to promote peace and a better and safer life, some are using lyrics of songs to promote this sentiment. One song by the Black Eyed Peas and Justin Timberlake seems to be a favorite here:

As usual around this time of the year, a lot of concerts and festivals are planned in major European cities. Many have been canceled in the wake of the attack in Nice. Rihanna was scheduled to perform Friday in the southern French city, but the concert was cancelled as she herself announced on Instagram. The Nice Jazz Festival, set to begin Saturday, has also been called off but the organizers are saying that the tickets will be reimbursed.

The French Embassy in Berlin has canceled its annual celebration of the national holiday at the Brandenburg Gate with a festival of Franco-German friendship. the festival usually lasts two days. the celebrations for Friday have been completely called off, whereas it has been announced that the festival will take place as planned on Saturday, 16th June 2016.

We have put together a playlist on spotify as an ode to French culture. See if your favorite French song has made the list:

In striking the jewel of the French Riviera on a national holiday the truck attack on Nice delivered a new blow to France's tourism sector already reeling from repeated terror attacks. (15.07.2016)

After the Bastille Day fireworks, a truck raced into the crowd. More than 80 people were killed and many more injured. Background to the location of the attack, which is a popular tourist Destination. (15.07.2016)

Two students and a teacher from Berlin are believed to have been killed in the terrorist attack in Nice, France. Berlin's school authorities and a local politician have confirmed the reports. (15.07.2016)