At least 18 people have died in a stampede in India. Chaos reportedly broke out among mourners who had gathered to pay their final respects to a deceased Muslim leader when police attempted to turn back the crowd. 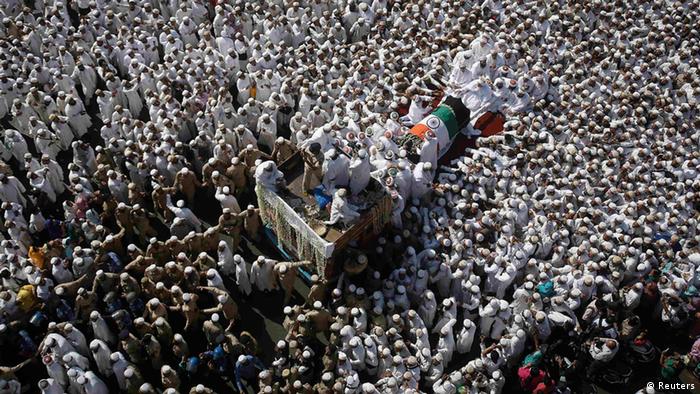 The death of Muslim leader Syedna Mohammed Burhanuddin drew tens of thousands of people from across India to Mumbai into the early hours of Saturday morning. The procession of mourners outside of his home in the upscale neighborhood of Malabar Hill in Mumbai turned deadly around 1 a.m. local time, when police began closing the gates to the grounds.

According to the Mumbai Police Comission, the police presence on site was not large enough to control the massive turnout.

"We didn't think the crowd would be so great," Mumbai Police Commission Satya Pal Singh said. "Also, it's an emotional occasion when police cannot take harsh measures to push back the crowd."

At least 18 died and 40 more were wounded in the subsequent chaos, according to Mumbai authorities and the Press Trust of India news agency.

Indian authorities attribute the country's high rate of stampedes during its religious festivals to poor security.

In October, over 100 people died in a stampede near a Hindu temple in India's central state of Madhya Pradesh.

Syedna Mohammed Burhanuddin led the Dawoodi Bohra Muslim community - a sect of Shiite Islam - for nearly five decades. The spiritual leader died on Friday at the age of 102.

His funeral procession (pictured above) was scheduled to begin on Saturday morning at his home in the upscale neighbourhood of Malabar Hill in Mumbai and end at the Raudat Tahera mausoleum, according to the Press Trust of India.

According to the Indian daily, Burhanuddin had been credited with rejuvenating the Dawoodi Bohra Muslim community. His efforts as a spiritual and community leader won him such honors as the Star of Jordan and Order of the Nile from the Jordanian and Egyptian governments, as well as honorary doctorates from Al-Azhar University in Cairo, Aligarh Muslim University and the University of Karachi.

At least 109 people have died in a stampede near a Hindu temple in India's central state of Madhya Pradesh. Many people were severely injured in the disaster, the second of its kind to occur at the shrine. (13.10.2013)