DW makes the most of multimedia. We do so by incorporating TV, radio and online services under one brand. DW keeps people connected to Germany and Europe. 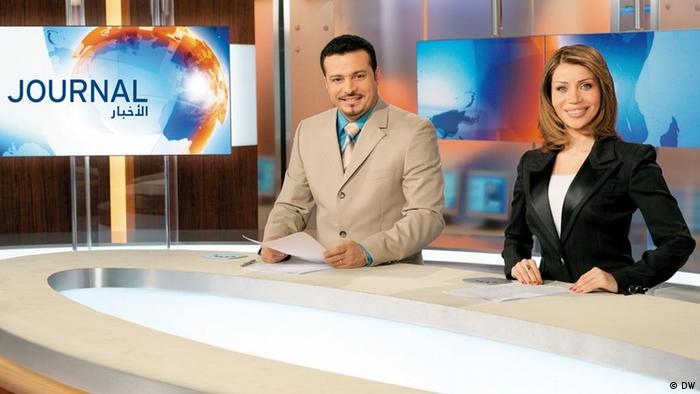 Arabic television program for the Middle East an North Africa: the news program Journal is the flagship

Six television channels around the world, a comprehensive website with content in 30 languages and radio broadcasts that still reach out to listeners in Africa and parts of Asia. DW – a uniform brand name that reflects Deutsche Welle’s services worldwide.

It also represents the basis of our television services – a channel with 24 hours of English programming that is available in North America, Africa, Asia and Australia. DW has tailored its TV lineups for other regions as well. DW (Europe) features 18 hours of programming in English and six in German in morning and evening primetime blocks. DW (Latinoamérica) offers viewers 24 hours of programming in Spanish. DW (Amerika) provides 20 hours in German and and four in English, DW (Asien) 24 hours in German. And DW (Arabia) provides viewers in North Africa and the Middle East with ten hours in Arabic and 14 in English.

The news program Journal is the flagship of the lineup. Culture is also a focal point for DW’s programming – and the daily magazine Euromaxx explores European life and style in all of its facets. The program is one of DW’s most successful and is broadcast in German, English, Spanish and Arabic. The line-up also includes live concerts on weekends and a magazine covering the latest developments in the digital world.

Working with partners to highlight dialogue

DW provides an inside look into a variety of issues with in-depth reports, features and documentaries. We are in-tune with the music world, as highlighted by the award-winning documentary "The Beethoven Project" and an upcoming film that documents the farewell tour for the legendary rock band the Scorpions.

With our talk shows we explore current events and developments and present different perspectives and opinions. In the Arab world, we have brought the next generation to the forefront with Shababtalk, a coproduction with the leading station in Egypt, and The New Arab Debates. Both of these programs provide a platform for discussion while highlighting the latest developments in the Arab world. DW also works with partner stations in Latin America on a Spanish-language talk show that examines regional issues.

Deutsche Welle will also make use of more programming from German public broadcasters ARD and ZDF. Deutsche Welle’s television program is available worldwide via satellite, cable providers, partner stations and in hotels. Viewers can also go online to watch the live stream or video-on-demand at www.dw.de.

DW’s regional expertise is showcased online at dw.de. We offer a full range of multimedia content in 30 languages – including Amharic and Arabic, Hausa and Hindi, Portuguese, Russian and Urdu.

We implemented comprehensive changes for our relaunch in February 2012 to make sure that we were ready for the technological developments of the future – with regards to content, structure and design. dw.de resembles a high-quality magazine with its clearly-defined structure and topical focus. As the reliable expert from Germany, it’s our task to organize and break-down important events and developments, while explaining the outcomes and providing in-depth analysis.

A key area of focus is on Germany and Europe in general – and a central editorial team for Germany reflects that. We have also concentrated our efforts on culture and education, which is something that our users around the world have come to expect.
Our website underlines our proven journalistic quality. It is something that is also manifested in the variety of multimedia projects that we have developed to examine current issues – like globalization.

Audio content has been supplemented by video content – we have started producing special TV magazines in regional languages for Southeast Europe, for Indodesia, India and for viewers in Brazil

In Africa – and also in parts of Asia – radio remains an important means of distributing information. That's why DW continues to offer radio programming via shortwave and local radio partners in major regional languages – such as Kiswahili for East Africa and Urdu for Pakistan.

Educational programming is important here and one of the main reasons that we developed "Learning by Ear”. Initially created for Africa, it has now been adapted for use in Pakistan and Afghanistan, where it is broadcast the most important local languages Dari and Pashtu.

German as a mission

DW stopped offering linear radio programming in German in late 2011. In order to fulfill our mission of fostering the German language, we expanded the range of our language courses to include television and online in February 2012. Whoever learns German at Deutsche Welle learns about culture and society in Germany – and about the people who live here.