Mulled wine and machine guns at Bonn′s Christmas market | Germany| News and in-depth reporting from Berlin and beyond | DW | 20.12.2016

Police have heavily increased their presence at the Bonn Christmas market after an attack in Berlin killed at least 12 people on Monday night. In Bonn, visitors were subdued but defiant. Some were angry. 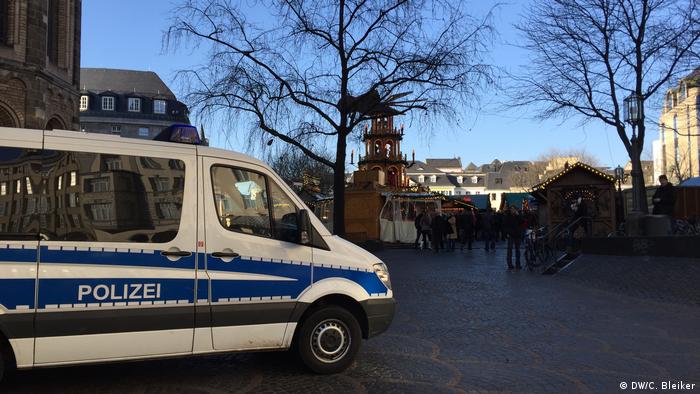 Bonn Christmas market at lunch time. The crowds around the booths selling sausages or mulled wine weren't any smaller than in previous days. One sausage vendor even said she was having the best lunchtime business she'd had all season on this cold Tuesday. And yet the mood was definitely not the same.

On Monday night a truck rammed into the Christmas market at Breitscheidplatz in Berlin, right in front of the famous Kaiser Wilhelm Memorial Church. At least 12 people were killed and around 50 were injured in the attack.  Police arrested a 23-year-old Pakistani late Monday night, but are now saying they haven't been able to confirm whether he was actually the perpetrator.

While some guests at the Bonn Christmas market were openly defiant and said they wouldn't change their lifestyle because of a terrorist attack, others admitted lunchtime at the market didn't feel quite the same with heavily armed police around. 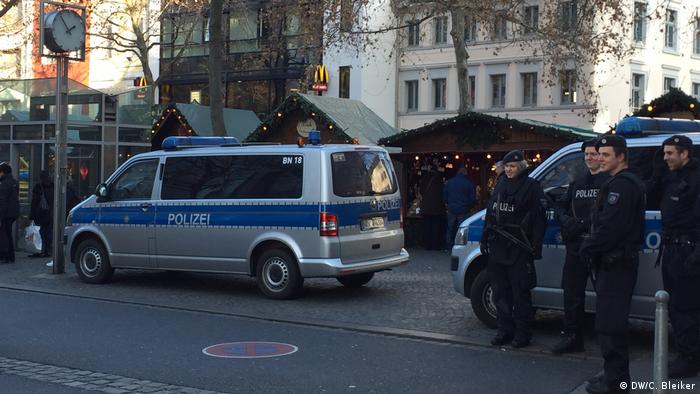 Armed police guarded the entrance to the Christmas market on Friedensplatz

"They're making me more nervous, not calming me down," Susanne, a Bonn local, said about the five police officers in uniforms who were standing at the market entrance close to city's main church.

It was the bulletproof vests and large automatic guns that made Susanne feel uneasy.

"What good does that really do?" she asked. "If someone detonated a bomb right now, there wouldn't be anything they could do about it."

Staying home not an option

Bonn police increased their presence at the Christmas market as a reaction to the attack in Berlin. In addition to deploying more officers, large police vans have been parked in locations where cars could drive right up to the booths.

Mascha works at one of those corners. She is selling cookies and hand-made chocolates at the festively decorated "Dunital" hut and told DW that the police van parked right outside her booth made her feel a little better.

"I worry about whether something like that [the attack in Berlin] could also happen here," she said. "But not opening today wasn't an alternative. And with the police here there's actually a sense of security." 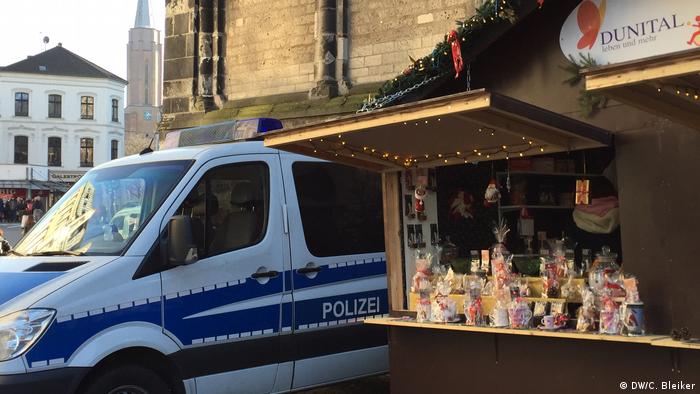 Two elderly women at a mulled wine booth on Friedensplatz also said that staying home was not an option for them. One of them admitted that the attack in Berlin did upset her. "It gave me goosebumps," she said. But she doesn't want to give in to the terrorists.

Her friend was more worried about the uptick of rightwing extremist sentiments she expected because of the reports mentioning the Pakistani suspect.

'Those are Merkel's deaths'

Hubert Markmann, one of the brothers running the "Almhütte" meat and sausage booth, talked defiantly about why he just had to show up for work Tuesday morning.

"We can't start erecting concrete walls now," he told DW. "I have friends who almost died last night in Berlin. It's a terrible situation. But if we start restricting ourselves and changing our lives now, the terrorists feel like they're in the right."

Markmann went on to talk loudly about the fact that Germany couldn't save the world and should take care of domestic problems rather than spending money on refugee homes. He had a captive audience in the small "Almhütte" indoor area.

A middle-aged couple vigorously nodded along and the man suggested they should send Markmann to Angela Merkel to talk some sense into the German chancellor.

"Merkel, pah!" Markmann exclaimed. "Those are her deaths."

Politicians from the rightwing "Alternative for Germany" (AfD) and their supporters started blaming Merkel and Germany's refugee policy right after the Berlin attack Monday night. 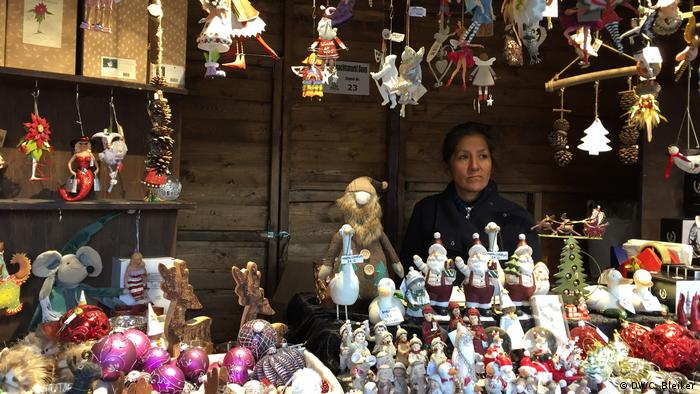 A woman from Bolivia told DW at her Christmas decoration booth that the hatred and anger worried her just as much as the attack itself.

"I was hoping there wouldn't be a backlash against refugees and migrants," she said, sounding tired and disappointed.

Not everyone's afternoon at the Bonn Christmas market was tarnished by the previous night's events. When asked whether they were scared after Berlin, several people wanted to know what had happened in Berlin.

Bonn University student Lea and her classmate Chen, an exchange student from Taiwan, had heard about the attacks. But they said they weren't worried - or surprised.

"It can happen everywhere and Germany is a target," Chen said. "Wherever you are, you can't avoid something like that anyway."

Opinion: Attack on Berlin is bound to change Germany

Germany's long-held fears have become reality, but it doesn't end here. The attack in Berlin is bound to change the country, says DW editor in chief Alexander Kudascheff. (20.12.2016)