Mubarak′s resignation is hailed as a victory for people power | World| Breaking news and perspectives from around the globe | DW | 11.02.2011

World leaders have welcomed the resignation of Egyptian President Hosni Mubarak after 18 days of peaceful protest. Now Egypt must ensure a "transparent, orderly and peaceful transition," said the United Nations. 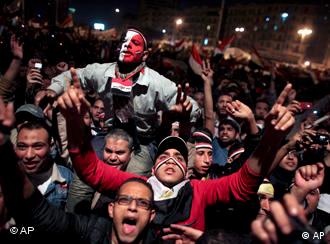 The streets of Egypt were filled with jubilant crowds

Egyptian President Hosni Mubarak stepped down on Friday, following 18 days of anti-government protests. In a brief statement read out on television, Vice President Omar Suleiman announced Mubarak had handed over power to the military.

Mubarak ruled for 30 years and the news of his resignation was greeted with a huge outburst of celebration by the thousands of protesters camped out in Cairo's Tahrir Square.

As Mubarak's rule came to an end, messages of congratulations to the Egyptian people came flooding in. World leaders welcomed a historic victory for people power, saying they now hoped to see a swift and peaceful transition of power. 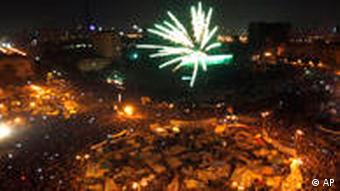 Fireworks erupted over Tahrir Square, which has been at the center of protests

"The voice of the Egyptian people has been heard," said United Nations Secretary General Ban Ki-moon. He commended the youth of Egypt for exercising their "legitimate" right to protest.

The grassroots movement for change in Egypt was also praised by US President Barack Obama. "Egyptians have made it clear that nothing less than genuine democracy will carry the day," he said.

"The ingenuity and entrepreneurial spirit that the young people of Egypt have shown… will allow the extraordinary potential of the generation to take flight," Obama said in a televised address.

The EU said it "respected" Mubarak's decision to stand down, and Foreign Policy Chief Catherine Ashton said "the future of Egypt rightly remains in the hands of the Egyptian people." 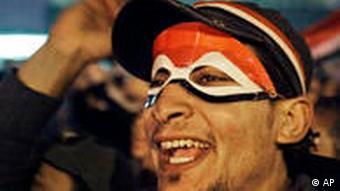 18 days of protests ended in celebrations on Friday

Germany's second-in-charge, Foreign Minister Guido Westerwelle, said ahead of his Saturday visit with Tunisia's interim authorities that Germany was "glad that the way has been cleared for a new political beginning."

In a statement French President Nicolas Sarkozy urged the Egyptian authorities to "proceed as fast as is feasible" with the reforms needed to turn Egypt into a free and pluralist society.

Confidence in the armed forces

Following Mubarak's resignation, power has been given to the Supreme Council of the Armed Forces to manage state affairs. The military high command is headed by Defense Minister Mohamed Hussein Tantawi.

US President Obama praised the "patriotic and responsible" role the military had played thus far and said it was important they now ensure a "credible" transition. 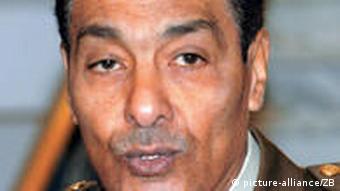 A statement from the United Arab Emirates also placed its confidence in the Supreme Council of the Armed Forces in running the country in "these delicate circumstances."

In Yemen, thousands of people took to the streets, chanting: "Yesterday Tunisia, today Egypt, tomorrow Yemenis will break their chains!"

Elsewhere in the Middle East, Israel had a more guarded response, as a senior Israeli official told the news agency Reuters it was "too early to forsee how [the resignation] will affect things."

"We hope that the change to democracy in Egypt will happen without violence and that the peace accord will remain."

82-year-old Mubarak has left Cairo with his family and has flown to the Red Sea resort of Sharm el-Sheikh, a ruling party official said.

World leaders have welcomed the decision of embattled Egyptian President Hosni Mubarak to step down after three decades of power. The European Union said it was ready to help the Egyptian people "in any way it can." (11.02.2011)

After ruling Egypt with an iron first for thirty years, Hosni Mubarak has stepped down as president. Deutsche Welle's Peter Philipp takes a look back at Mubarak's legacy and his controversial relationship with the West. (11.02.2011)