On a visit to Berlin, Mozambican President Filipe Nyusi called for an end to ongoing clashes between government and opposition forces in his country. He also appealed for more German investment. 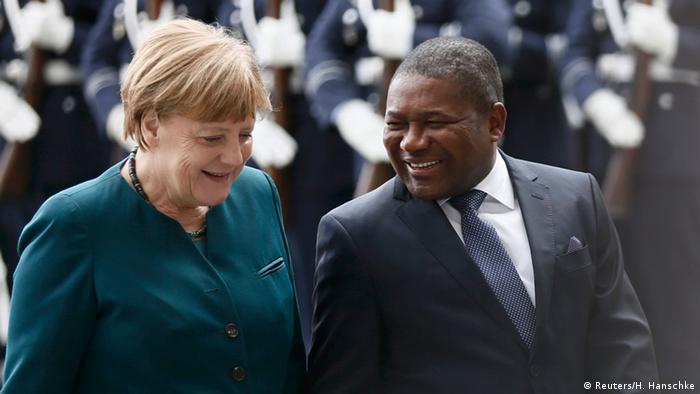 Filipe Nyusi, president of Mozambique since 2014, has just spent two days in Berlin during which he held talks with German Chancellor Angela Merkel and President Joachim Gauck. Nyusi's party Frelimo has ruled Mozambique since independence in 1975. Frelimo and the opposition party Renamo blame one another for recent, sporadic, armed clashes in the center of the country. The UN says several thousand people have fled Mozambique for neighboring Malawi. DW spoke to President Filipe Nyusi in Berlin.

DW: Mr President, there are almost daily reports of armed clashes in Mozambique. They are sparked either by armed members of the Renamo opposition or by the Frelimo government forces. How secure is Mozambique?

President Filipe Nyusi: This is a question which can be answered best by people who live in Mozambique. There are many foreign nationals living there and they are well equipped to answer that question. Yes, by and large, the country is secure, but we Mozambicans are not satisfied. We want to do better. We want peace across the whole of Mozambique so that the economy can grow and the country can continue with its development. It is true that there are tensions in some areas, in particular in the center of the country. This is where Renamo reguarly attacks civilian vehicles - buses, ambulances and trucks carrying food supplies. These murderers are, of course, being hunted by our security forces. Roads have been partially destroyed, trucks hijacked and then set on fire. There has been no official declaration of war and these attacks have only occurred in one localized area. 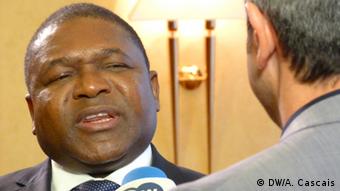 What are you and your government doing in order to find a peaceful, political solution to the conflict?

We are determined to find a peaceful solution. We hold elections every five years; that is part of the search for a solution. As you know there can only be one winner in elections. These elections are monitored by international observers and in addition the electoral process is scrutinized by all political parties. That means that we respect the practice and the rules of democracy. Most Mozambicans want peace. We are a peace-loving and tolerant people. We are open to reconciliation. That's why we are appealing to all who are bearing arms to lay down their weapons. Only the security forces in our country should be armed. We hope that our political opponents will understand that democracy can only be built upon dialogue.

You have come to Germany primarily to boost bilateral economic ties. What did you discuss with Chancellor Merkel?

We are here at the invitation of the German chancellor. We received the invitation immediately after our election victory on October 15, 2014. We have had good relations with Germany for the last 40 years. They began with our cordial ties to communist East Germany [the now-defunct German Democratic Republic] and later expanded to include the whole of reunited Germany [Federal Republic of Germany]. Everything has become a lot easier since German reunification [in 1990]. We are linked by friendship and a desire for cooperation. Things are moving ahead in relations between our two countries. Together with the chancellor we have been taking stock of the sectors in which active cooperation is already in place, one example being training and education. Other sectors include the decentralization of our country and agriculture. The energy sector is also an area in which Germany is very strong. We have come here to gauge and evaluate the scope of bilateral cooperation.

I have come to Germany accompanied by a large Mozambican business delegation. We want to forge partnerships here. We have a lot to offer. Mozambique is a big country. We have mineral resources, forests, our tourism sector has great potential. Germany also has a lot to offer. It has the necessary technology and expertise as well as investors with an eye on the future.

Filipse Nyusi is President of Mozambique