"What do you mean, you're going to Germany? Alone — as a girl?" When Asimina Paradissa told the boys in her native Greek village in the mid-1960s that she was going to Germany , to Wilhelmshaven, they couldn't believe it. Women who went away alone had a dubious reputation. Would she earn her money as a woman of the street? Asimina Paradissa never cared about such prejudices.

"The boy who told me that went to Germany himself a few years later," the Greek woman laughs as she proudly and cheerfully tours the exhibition "In Situ: Photo Stories on Migration" at Cologne's Museum Ludwig.

A whole wall in the show is dedicated to her and her story. Paradissa has always loved taking pictures. Even as a young girl, she helped the local photographer in her village develop film. And she also liked to have herself photographed. In the process, she gave her friends and colleagues clear instructions on how she wanted to be presented in the picture. 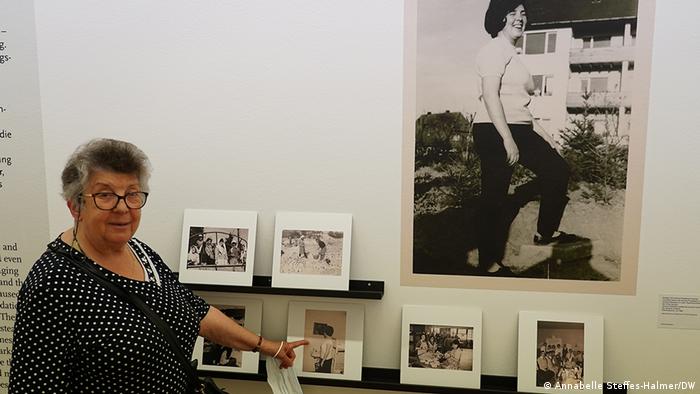 One of the images shows Paradissa on the day she learned to ride a bike in Germany: "I rode five kilometers, all the way to the neighboring village and back," she recalls. "But I had a problem: I couldn't get off, I always fell over."

Cycling never became her thing — instead, after passing her driver's license, she bought a sky-blue Opel Kadett. But she had achieved her goal: learning to ride a bike in Germany, because in conservative post-war Greece, it was forbidden for girls and women.

Poetry at the assembly line

Asimina Paradissa didn't just want to go to Germany in 1966 for work. The young woman was also looking for freedom and found a new home in Wilhelmshaven, in northern Germany, thousands of kilometers away from her home village of Vrasta on the Chalkidiki peninsula.

One of the pictures shows her in front of the dormitory of the Olympia Company, where she moved into when she was barely 20 years old. Olympia was then a major manufacturer of typewriters. "My father had to give his consent, because at that time you were not of age until you were 21." 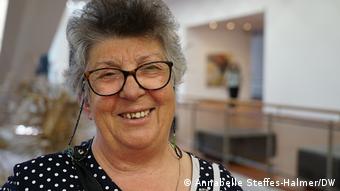 During the day, Paradissa worked at Olympia's factory, making typewriters. She was used to hard work. At 19, she had worked in a quarry in Greece, hoisting rubber baskets full of stones up mountains in the scorching heat. In comparison, the work at Olympia was easy for her.

With her first savings, she bought a camera and a typewriter with a Greek keyboard. In the evenings, she would type up her poems, which she created in her mind during the day while working on the assembly line. Today, she still writes and takes pictures passionately.

Asimina never got married. "I didn't have time for that at all. I was always working and saving for the next vacation, then working again and saving again." And so, the years flew by. Suddenly 55 years had passed. Paradissa now lives in Wuppertal.

Among other things, she spent 32 years building locks for Volkswagen, Ford and Mercedes, and as a cleaner at a screw manufacturer. She never intended to stay in Germany permanently: "You don't even notice it! The years have gone by so quickly." 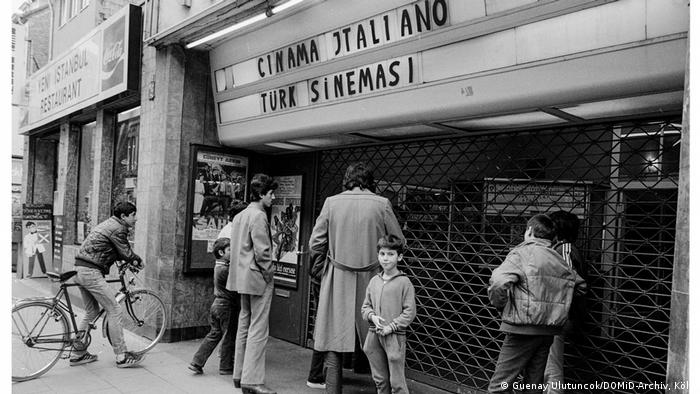 Many Italians also immigrated to Germany: This cinema in Cologne showed films in Italian in 1982

Asimina's story is similar to that of thousands of people who came to Germany to work following the Second World War, mainly between 1955 and 1973. Many of them stayed. Actually, you only have to look at the many restaurants in German cities to know where the so-called guest workers mainly came from: Italy, Greece, Turkey.

The still young Federal Republic (West Germany) was dependent on them to keep the German "economic miracle" going. This was because part of the mainly male population of working age was lost during the war. In addition, the birth rate was falling.

So, the West German government signed recruitment agreements with several countries to ensure that the flow of able-bodied men — and later also women — did not stop.

This year marks the 60th anniversary of the recruitment agreement with Turkey, but thousands of people from Italy, Spain, Greece and five other countries also made their way to a country that was completely foreign to them. Without language skills, without much luggage, but always with photos of their loved ones in their bags.

Giving a voice and a view to migrant workers

"Personal photographs and the associated stories of our protagonists are central to our exhibition," explained guest curator Ela Kacel. "They convey arriving in a new place, of situating oneself, of perceiving and shaping one's own living environment."

The architecture historian prompted the creation of the exhibition "In Situ: Photo Stories on Migration," which is now on show in Cologne until October 3, 2021. Kacel also conducted interviews with the 16 protagonists who contributed photographs from the years 1955 to 1989. 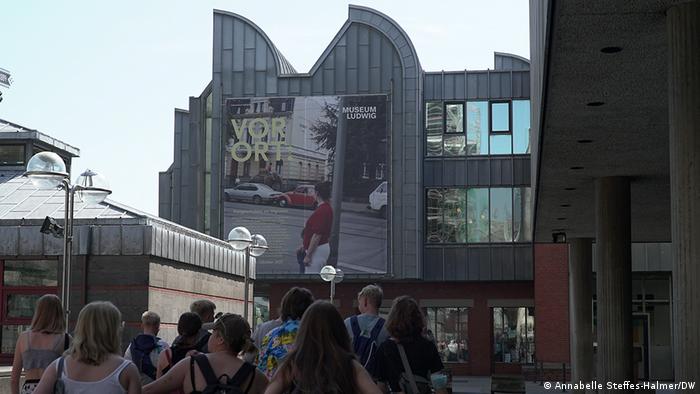 It was important to her to let these people speak for themselves. Because until now, "the images that determined public perception [of guest workers] did not come from the men and women themselves, but from the media, employers, commissioned photographers or editors of company magazines, and later, also from photo artists."

This is thus the first time that private photographs have been the focus of an exhibition in the Cologne museum, thanks also in part to the holdings of DOMiD, the documentation center and museum on migration in Germany.

Complementing the exhibition are photographs by well-known photographers, such as Chargesheimer, Candida Höfer and Heinz Held, which give a "view of Cologne that people in Cologne are familiar with," says museum director Yilmaz Dziewior.

"At the same time, we show other public photographs, namely those of GAG, the public housing company from the 1960s." Dziewior said he was most interested in those for whom these buildings were built in Bauhaus-style: "Where is the perspective of those who lived there?"

A special take on things 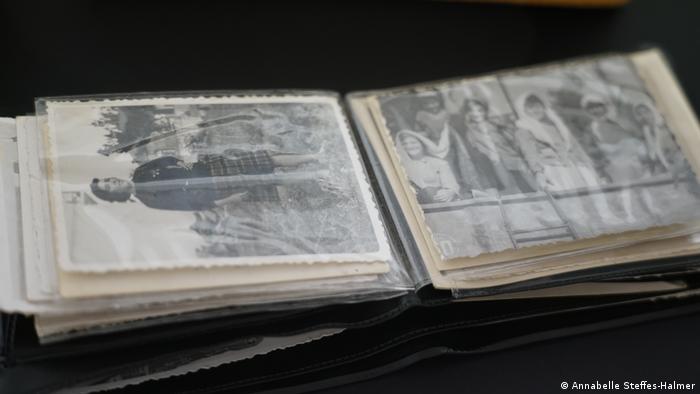 This gap in the collective memory can now be bridged, due to the photos Asimina Paradissa and the other protagonists took in the past. Many of them are yellowed and stained as they were often pulled out by hand to be viewed and reminisced over. Of course, the 76-year-old also sent pictures to her family in Greece, to show her mother she was doing well in Germany.

And that was not a lie. Paradissa quickly made friends in Germany. In her dormitory in Wilhelmshaven, she lived together with more than 70 other women. All of them colleagues, many of them friends. Only rarely did she feel truly lonely.

Paradissa has now lived in Wuppertal for more than 30 years, and loneliness is not an issue: "I'm in three dance groups and several clubs, and that's my life now." The pensioner still travels regularly to Greece, but after a few weeks at the latest, she misses Germany. "I feel at home here," she says, "but I'll be buried in Greece!" Until then, hopefully, the fun-loving woman has a lot of time left.

From the outside looking in

Memorials, books, exhibitions - the memory of the Holocaust is universally present in Germany. But how important is this tragedy for people with a migrant background? DW asked several to find out.

Migrants' stories from a new home

In the 1960s, workers from several countries flocked to Germany to support and partake of the country's economic success. An exhibition tells their stories.

'We are from here': Turkish-German life in pictures

To mark the 60th anniversary of the German-Turkish recruitment agreement, the Ruhr Museum is exhibiting photographs by Istanbul photographer Ergun Cagatay.

Without Borders Film Festival: a bold mix of doc and fiction films

From an adolescent's coming out, to a concentration camp saga, the Without Borders Film Festival in Bad Saarow has plenty to offer. It opens September 17.