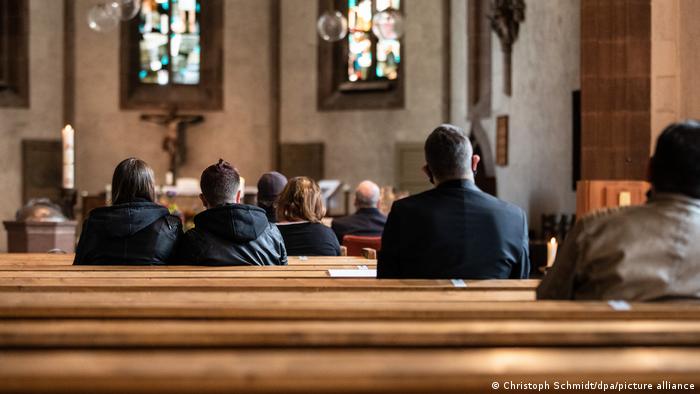 Fewer and fewer people in Germany are attending religious services

Most Germans say religion has no significance in their lives, according to a poll released Thursday — with just 33% saying it was important to them.

Only 12% said they thought religion could make the world a better place, with just a quarter saying it had any political significance.

Year after year, disillusioned congregation members have been leaving Germany's Catholic and Protestant churches in droves. The result is that only about half of all people belong to one of the country's big Christian faiths.

Some 30% of respondents described themselves as "devout" or "very devout," while 35% said they were "not devout at all."

The eastern states of Germany, in particular, have a high proportion of people who describe themselves as "not at all religious," the foundation said.

Meanwhile, the regions with most people describing themselves as devout were the southern German states of Bavaria and Baden-Württemberg (35%) and western states (32%). Only about 21% of people in eastern states gave this description.

In contrast, some 61% of Germans said the religion was either "not important," or "not at all important."

Younger people were less likely to give a decisive statement about how important religion was to them.

The survey suggested younger people were more upbeat than others in their assessment of the role of faith.

Some 16% of young people agreed with the thesis: "The religions of this world contribute to making the world more just."

That compared with about 12% of people across all age groups. Well over half disagreed, and 26% were undecided on the issue.

For most devout Germans (75%), the coronavirus pandemic has done nothing to change their faith, it was also reported.

Among younger Germans, some 12% said their faith had become stronger during the pandemic — about twice the number compared with older voters.

Only 14% of respondents see a positive role for religions in combating climate change. The age of the respondents was also dependent on age here, with the figure among under-30s as high as 20%.

The survey release coincides with a conference of the interreligious non-governmental organization "Religions for Peace" in the southern German town of Lindau.

The poll surveyed more than 2,000 people across all age ranges in all German states.