UN data show that more than 300,000 refugees have tried to reach Europe so far this year. Some 2,500 have died or gone missing in their attempt to cross the Mediterranean. 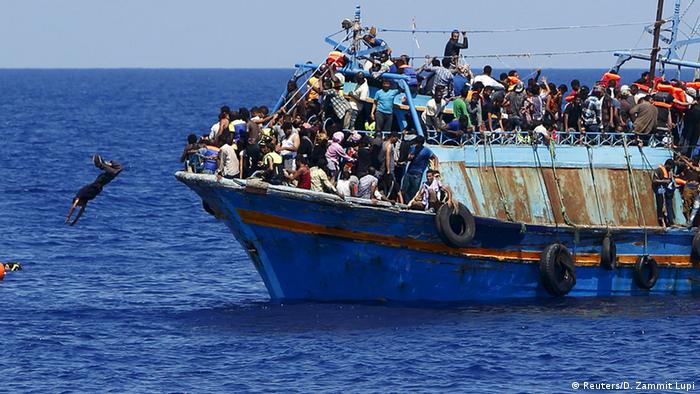 The number of migrants and refugees crossing the Mediterranean so far this year has exceeded 300,000, the UN's refugee agency UNHCR said on Friday.

At the same time, some 2,500 migrants or refugees are estimated to have died or gone missing this year, trying to reach Europe. Last year, some 3,500 people died or were reported missing in the Mediterranean Sea.

"The way people are being packed onto boats is causing their deaths," UNHCR spokeswoman Melissa Fleming told a regular UN briefing.

The figure does not include casualties from a boat that capsized off the coast of Libya on Thursday. There, the UNHCR says, 200 people are still missing and feared dead.

Many of the people trying to reach Europe are from countries shaken by war, violence and conflict, such as Iraq, Afghanistan and Syria. Despite the influx of refugees, Europe is not bearing the brunt in this migrant crisis, as most refugees stay closer to home.

Beat Schuler, senior protection officer at UNHCR, said in a television interview with DW that "more than 4 million people are refugees outside Syria, most of them are in neighboring countries," with only "around 250,000 Syrians coming to Europe."

He added that Europe needed to do more and that all countries had to "act responsibly."

Three people have been arrested in Hungary in connection wth the deaths of 71 migrants in Austria. The victims were found in a poultry van on a highway near the borders with Slovakia and Hungary. (28.08.2015)

A Syrian man donated the equivalent of a month's wages to East Germans fleeing their country for West Germany in 1989. The German Foreign Office donated the money to a charity that helped East German refugees. (28.08.2015)

Refugees are welcome: That's the message German music stars including Udo Lindenberg want to give in a concert in front of Berlin's Brandenburg Gate one day after the 25th anniversary of German reunification in October. (28.08.2015)