Narendra Modi has been sworn in as India’s next prime minister. His Bharatiya Janata Party (BJP) won by a landslide against the Indian National Congress, which had led the country for most of the post-independence era. 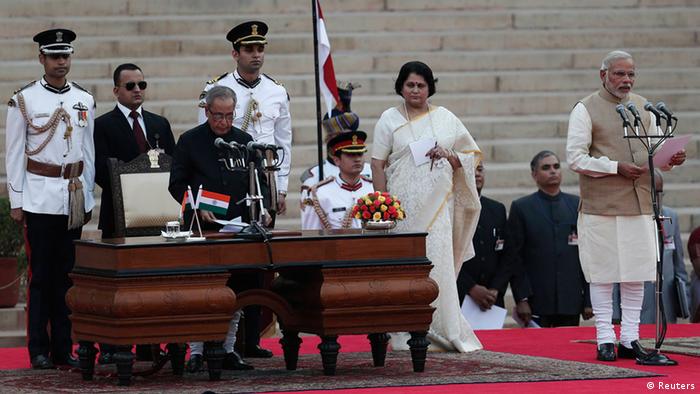 Some 3,000 guests - among them foreign dignitaries, Indian lawmakers and other public figures - gathered before the presidential palace in New Delhi on Monday for the swearing in of Narendra Modi, the country's next head of government and its 15th prime minister. President Pranab Mukherjee administered the oath of office to Modi and his cabinet ministers.

"As we devote ourselves to take India's development journey to newer heights, we seek your support, blessings and active participation," Modi said in a statement published on the prime minister's website. "Together we will script a glorious future for India."

The 63-year-old BJP leader ran on a campaign of pro-business policies and reduced corruption. While his supporters see him as India's best chance to boost the country's ailing economy, critics have warned his religious hardliner reputation will fuel religious tension in the majority-Hindu country, which is home to 150 million Muslims.

Ahead of the ceremony, a tragic collision on India's railway left more than 40 people dead and injured at least 100 more.

The ceremony was the first to which heads of state from South Asia had been invited. Most prominent among them was Pakistani Prime Minister Nawaz Sharif, whom Modi invited over the weekend. Both leaders have signaled a willingness to improve relations between their nations, which have been tense since they gained independence from Great Britain in 1947.

"Both governments have a strong mandate. This could help in turning a new page in our relations," Sharif told NDTV news channel ahead of his visit, during which he is to meet with the new Indian leader.

They have fought three wars over the disputed Himalayan region of Kashmir. Ties were frozen following the 2008 attacks in Mumbai in which Pakistani terrorists killed 166 people, but Saturday's move could be another sign of easing tensions between the two nuclear powers.

Modi, a right-wing Hindu nationalist, took a hard line on Pakistan's role in sponsoring attacks in India, but has eased his stance somewhat since Bharatiya Janata secured the first majority in parliament by a single party in 30 years.