Indian Prime Minister Narendra Modi has accepted an invitation to make his first official visit to rival Pakistan next year. He and his counterpart Nawaz Sharif announced the move at the BRICS summit in Russia. 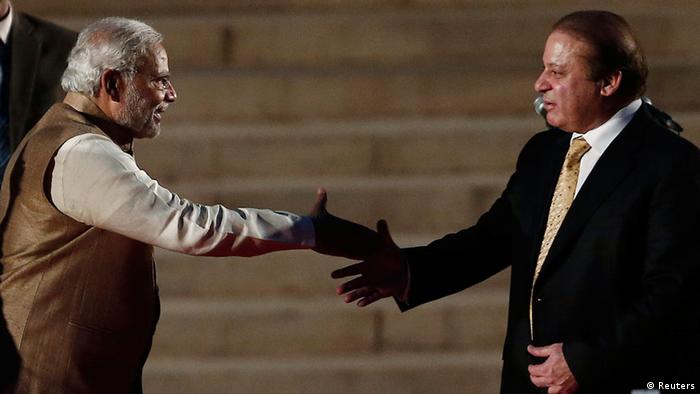 Indian broadcaster NDTV said Sharif and Modi held talks, focused on the 2008 Mumbai terrorist attacks, for an hour on Friday on the fringe of the summit in Ufa, Russia.

It said India had agreed to send more evidential voice recordings against suspects held in Pakistan for their alleged roles in the attacks on Mumbai, India's commercial hub.

In the past, Pakistan has reacted to Indian accusations of being slow to prosecute the alleged mastermind Zaki-ur-Rehman Lakhvi by saying India had failed to submit strong evidence.

Officials at the summit said voice samples of suspects who gave instructions from Pakistan on the phone to the 10 terrorists who fanned across Mumbai would be sent to Pakistan, NDTV said. The 2008 Mumbai attacks claimed 166 lives.

Encounter on fringe of summit

The Press Trust of India news agency said the two leaders' encounter - their first in over a year - occurred during a dinner hosted by Russian President Vladimir Putin at the summit of the BRICS group of emerging powers.

Modi and Sharif first met in May last year (pictured above) when the Pakistani leader attended Modi's swearing-in ceremony.

Relations between the nuclear-armed neighbors had also remained cool over border skirmishes in the disputed Kashmir region.

Earlier this week, the two countries had exchanged fire at a border segment near the Pakistani city of Sialkot.

India has long accused Pakistan of arming and training Kashmiri insurgents. Pakistan has denied such charges.

Since independence from British rule in 1947, India and Pakistan have fought three wars, two of them over the mostly Muslim-region of Kashmir.

India has condemned Pakistan's release of a man accused of having masterminded the 2008 Mumbai attacks, in which 166 people died. The case has further strained ties between the two nuclear-armed neighbors. (10.04.2015)

The release on bail of Zaki-ur Rehman Lakhvi, the main suspect in the 2008 Mumbai terror attacks, has prompted angry reactions in India. But how will this impact the already strained bilateral ties? DW examines the case. (13.04.2015)