A minimum wage of 8.50 euros ($10.50) will come into effect in Germany as of January 1, 2015. Proponents say it will boost the economy while critics claim it will destroy jobs. Nicole Goebel takes a closer look. 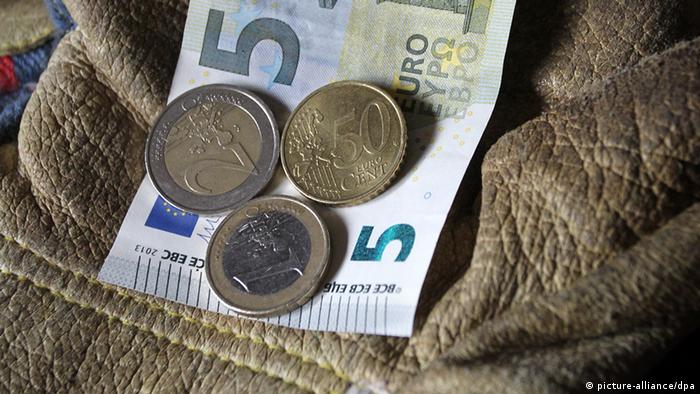 The tiny Duchy of Luxembourg was the first European country to introduce a minimum wage in 1944 - today it also offers the highest hourly rate in Europe of 11.10 euros. Of the 28 EU member states, 21 have set a minimum wage, others have traditionally relied on collective bargaining agreements to set wages, including Germany.

It worked well for decades, but now that Germany's low-pay sector is growing and union membership is falling, many workers do not benefit from the collective bargaining system and are paid very low wages.

It will be mandatory for all workers aged 18 and over, with the exception of trainees. The long-term unemployed will not be paid the minimum wage within the first six months in a new job. A minimum wage commission is to review the rate in 2017.

According to a recent survey from the Munich-based Ifo economic institute, 26 percent of companies affected by the minimum wage plan to raise prices, and 22 percent are set to reduce staff. Eighteen percent plan to reduce working hours to offset higher labor costs. But 43 percent of firms do not plan any measures at all.

The German Employers' Association (BDA) believes the minimum wage is "the most threatening intervention in the autonomy of the wage bargaining system."

It and other crirics say the minimum wage will destroy jobs and make it even harder for low-skilled workers to enter or re-enter the jobs market.

Michael Burda, labor market expert at Humboldt University Berlin, points out that workers who are paid the minimum wage are often low-skilled and thus less productive in an economic sense. Thus, they can be replaced by machines more easily if they get too expensive.

"Investment has been low in Germany in the last 10 years, since the Hartz [labor market] reforms even though the economy is growing fast," Burda told DW.

"One explanation is that labor is cheaper. When labor is cheap, you substitute into labor, so the negative side of having lots of jobs…is that you invest less and have less productive workers." Burda says sectors like the fast food industry and other services will invest more in capital, meaning machines and equipment, at the expense of jobs. 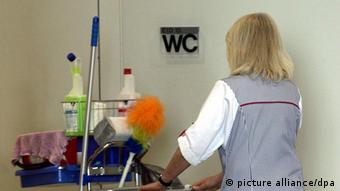 Low-paid jobs like cleaning and waiting may be under threat

It can also have an "accordion" effect, according to Burda. "For each wage category you're going to have upward pressure, it's the idea of maintaining a certain distance to the guys who are less qualified than you are."

Look across the pond

German workers in the low-wage sector who are not part of the collective bargaining system are often forced to top up their income with benefits to make ends meet. Critics of the minimum wage argue that the system is valid as it "builds a bridge to employment," according to Michael Hüther from the Cologne Institute for Economic Research in a column for the German daily "Bild."

But Germany's Hans-Böckler Foundation argues that this bridge function has not materialized. "Low-skilled workers' job prospects have not improved, nor has precarious work been a stepping stone to regular employment," it says, citing a study by the University of Duisburg-Essen.

In the US, which has a binding federal minimum wage of $7.25 (5.85 euros) and state minimum wages that cannot go below the federal rate, there are tax credits to effectively top up people's income. "You can file for a subsidy, the earned income tax credit, it's like a negative income tax, so every quarter you get a check from the government," Burda told DW. "So you don't have to humiliate yourself by going to the welfare office." The subsidy is, however, only open to families, not singles.

Burda says the minimum wage has worked well in the US. "At low levels it has only the effect of preventing the abuse of market power [of companies and organizations - the ed.]."

But, he says, although the rate in the US is too low, it can be too high as well, thus reversing its positive effect, which can lead to high unemployment, especially among young people, as is the case in France, where the minimum wage stands at 9.53 euros. France has also softened the blow of a high minimum wage by subsidizing employers' social security contributions for staff. 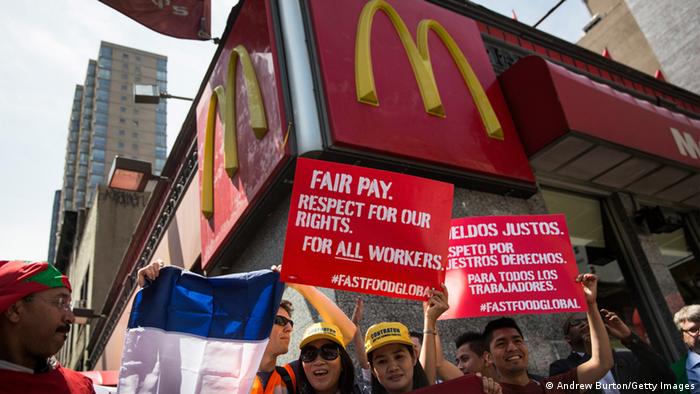 The US has a minimum wage, but many argue it's not a living wage

The UK, where the minimum wage stands at 6.50 pounds per hour (8.20 euros) for persons aged 21 and over, also offers tax credits as an indirect income boost.

The most obvious argument in favor of a minimum wage is, perhaps, the simple fact that it puts more money in people's pockets, which they tend to spend and, thus, boost the economy. Germany has long been under pressure by European neighbors to fuel demand at home to balance out its sizeable trade surplus.

And the union-affiliated Hans-Böckler Foundation points out that empirical studies have shown that "a minimum wage has no significant impact on employment," according to a study from June 2014 summarizing various research papers.

They argue that many critics of the minimum wage use theoretical models for their research that have little to do with the realities on the ground. Those studies, they argue, often assume, for example, that employers never abuse their market power, which they say, is unrealistic.

A study from Berkeley University's Institute for Research on Labor and Unemployment from March 2014 on the effect of increases in the minimum wage in the US states that "raising the minimum wage can reduce turnover and increase job stability."

It goes on to say that firms often absorb the higher costs through price increases and accepting lower profits. Lower turnover of staff also cuts down on costs for training and recruiting, according to the study.

It remains to be seen, if price increases will be tolerated by customers. Michael Hüther says where prices cannot be raised, "the jobs will vanish."

But the study also says that a minimum wage is no "cure-all" and that a significant rise in the minimum wage may well have a different effect. US President Barack Obama is currently at loggerheads with the US Congress over his plans to raise the federal rate to $10.10.

Germany, meanwhile, has been praised by the International Labour Organization (ILO) for the introduction of the minimum wage to combat rising inequality.

Michael Burda also thinks the minimum wage is a "no-brainer" for Germany, as "people in Europe tolerate inequality less than they do in the US or in England."

He says the argument of market power - that is the abuse or dominance of certain companies or organizations in certain sectors or regions - cannot be dismissed, and, thus, "a moderate minimum wage is the right answer."

The implementation of a minimum wage in Germany could lead to price increases and staff cutbacks, studies suggest. The move could negatively affect the low qualified workers it was designed to help. (04.12.2014)

Seattle to get highest minimum wage in the US

Municipal authorities in Seattle have approved the phasing in of the highest minimum wage across the United States. The deal was cheered by labor activists, but drew harsh criticism from business organizations. (03.06.2014)