Germany's military counterintelligence agency has warned that extremists could be using the Bundeswehr to train. More than 20 former soldiers have gone to Iraq and Syria to fight alongside the "Islamic State." 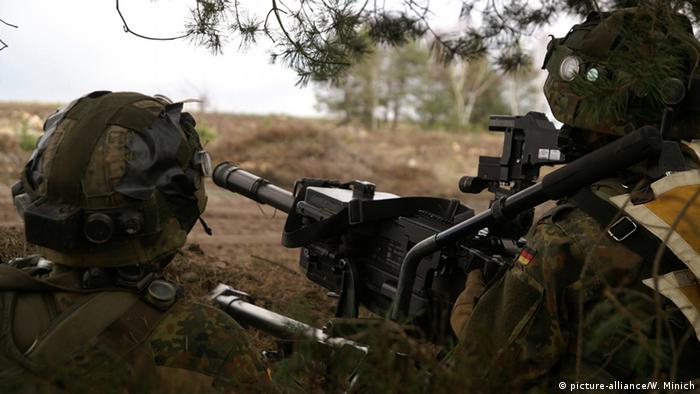 On Sunday, Germany's military counterintelligence agency, MAD, warned that extremists had potentially used the Bundeswehr to gain skills that they could then take to groups such as the "Islamic State" in Syria and Iraq.

MAD President Christof Gramm told the online edition of the newspaper Die Welt that it was clear, for example, that the killers who launched an attack on the Paris magazine Charlie Hebdo two months ago had military skills.

"We're seeing the risk that the Bundeswehr can be misused as a training camp for violence-ready Islamists," Gramm told the newspaper on Sunday.

Following the attack on Charlie Hebdo, French authorities launched a crackdown on anyone who expressed support for extremism. To whom people express their loyalty has become increasingly important in the current political climate.

Gramm has proposed an initial check for applicants to Germany's armed services. "We would like to see if there are future doubts about the loyalty of future soldiers," the intelligence agency boss said on Sunday. He added: "What if a Bundeswehr-trained Islamist did something and we hadn't noticed?"

The news comes as police searching for the British IS executioner "Jihadi John" say that he may have trained with a German man.

IS has succeeded thanks not only to its military prowess, but also to a slick media campaign that occasionally ropes in foreign broadcasters as de facto partners.

As troops return home from the Middle East, more and more of them are being diagnosed with mental disorders. The government says it's because PTSD is less stigmatized. The opposition says not to send people to war. (11.02.2015)

Germany's troop deployment to Iraq has been extended by nine months. Chancellor Olaf Scholz's government has called an official end to Germany's operations in Syria.