Militants attack German base after Merkel visit | Germany| News and in-depth reporting from Berlin and beyond | DW | 06.04.2009

A German military base in Afghanistan came under rocket fire shortly after an unannounced visit by German Chancellor Angela Merkel -- her first since 2007. 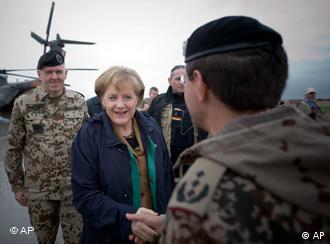 Officials in Berlin confirmed that two rockets were fired at the base just 20 minutes after the chancellor and Defense Minister Franz Josef Jung left by helicopter.

The missiles landed outside the perimeter fence and caused neither casualties nor damage.

Merkel's two-day itinerary is being kept secret for security reasons, but officials say it will allow her to discuss reconstruction projects and visit German soldiers deployed as part of the 60,000-strong NATO-led International Security Assistance Force.

After receiving a briefing on work conducted by the Provincial Reconstruction Team in Kunduz, Merkel travelled roughly 150 kilometers west to another German base at Mazar-e-Sharif. 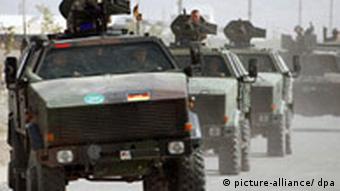 Reports from DPA news agency quoted Merkel as saying "there is hope", although she also stressed that more must be done to improve security in the region.

Recent days have seen a number of other security incidents occur in and around Kunduz.

German soldiers came under fire late on Sunday night as they secured a bridge construction site about seven kilometers from their camp.

No one was injured in the blast, but one armored vehicle was severely damaged.

At its summit in Germany and France, the alliance decided to put a greater emphasis on reconstruction alongside its fight against Taliban militants.

While US President Barack Obama called on the alliance to commit more funding and troops to Afghanistan, Merkel confirmed that Berlin would deploy an additional 600 soldiers to help secure presidential elections in August.

The decision was reached last autumn, when Germany's lower house of parliament approved a bill raising the maximum number of Bundeswehr troops that could be deployed to Afghanistan to 4,500.

Merkel, who faces an election in six months' time, had appeared reluctant to increase the number of German troops involved with NATO's Afghanistan mission, which remains highly unpopular among Germans.

She has also consistently resisted pressure from allies to send Bundeswehr soldiers to the more dangerous southern areas of the country.

But Merkel told lawmakers last month that NATO had to succeed in Afghanistan to prevent the country again becoming a base from which "terrorists" could attack alliance member countries.

"For me our aim remains clear, against which our success will be measured, that Afghanistan no longer poses a terrorist threat to our security, in other words in NATO member countries."

An influential survey finds that Germans support NATO, and hold France and especially new US President Barack Obama in high esteem. But they’re still skeptical on keeping troops in Afghanistan. (03.04.2009)

Afghanistan and NATO topped the agenda when US President Obama met his French counterpart in Strasbourg, before a two-day NATO summit. If Obama had hoped for more French troop commitments, he was to be disappointed. (03.04.2009)