Mike Tyson, the 54-year-old former heavyweight boxing champion, showed glimpses of his destructive prime during his return to the ring for an exhibition match against the 51-year-old Roy Jones Jr. 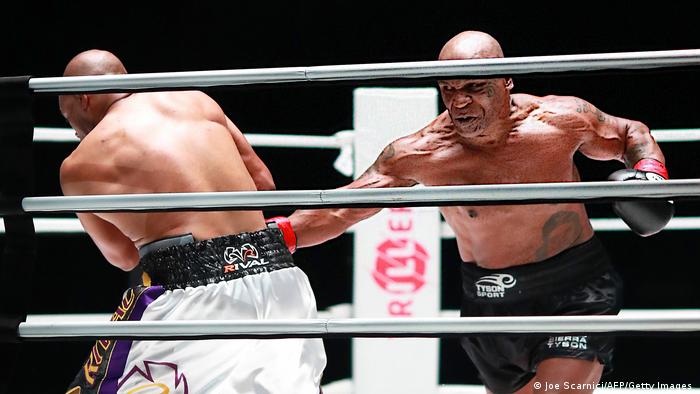 Neither boxer landed a knockout blow in the exhibition match, with the fight not officially scored. Tyson, however, looked faster and more aggressive across the eight two-minute rounds.

Both boxers had impressive moments during the fight, and both emerged smiling and apparently healthy from the event.

"I'm good with it," Tyson said after he was told the fight was adjudicated a draw.

"I ain't never happy with a draw. I don't do draw," Jones Jr. said, admitting that Tyson hurt him throughout the bout, particularly with body blows. "If he hits you with his head, punches, body shots, it don't matter, everything hurts. Body shots definitely took a toll. Body shots are what makes you exhausted."

The fight took place at the Staples Center in Los Angeles, with no official judging and limited violence.

The much-hyped Tyson-Jones fight was promoted by Triller, a video-making app and social media platform. The fight-night also featured performances by several rappers including Snoop Dogg.

"This is better than fighting for championships,'' Tyson said of the heavyweight exhibition, which raised money for various charities. "We're humanitarians now. We can do something good for the world. We've got to do this again," he added.

Return of the 'baddest man'

Tyson, once considered the "baddest man on the planet," was fighting for the first time in 15 years.

"This is the fun part," Tyson said ahead of the Saturday fight. "Everything else to get here was hell."

In 2005, Tyson wrapped up his illustrious boxing career after losing his last professional fight to journeyman Kevin McBride.

He became the heavyweight champion at the age of 20 and reigned over the division for five years.

A chance to be Tyson's opponent

While Tyson became an international icon for his dangerous image and numerous misbehaviors, Jones Jr. was widely regarded as the most skilled boxer of his generation.

Jones Jr. fought regularly throughout the 2010s and retired from boxing in 2018.

He said that when he got an offer to be the opponent in Tyson's comeback, he could not resist the chance to fight a legend he never got to fight during his time mostly as a light heavyweight boxer.

The Saturday event was dubbed an anti-sporting spectacle by some critics, yet both Tyson and Jones appeared to handle themselves capably and safely. Fans were clearly enamored, with the show getting enormous traction on social media.

Read more: Mike Tyson: 'Everyone fights for a reason'