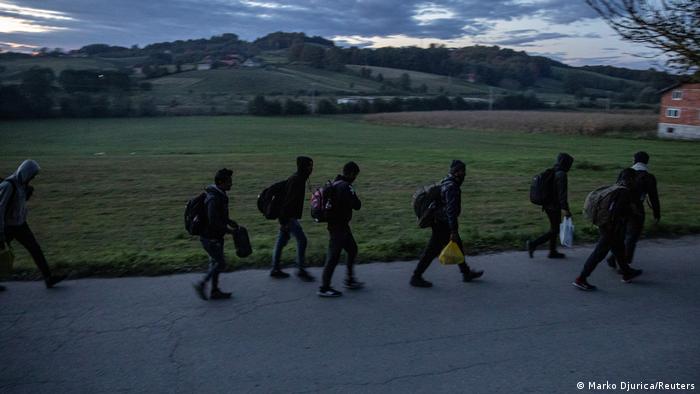 Dozens of protesters temporarily blocked Croatia's border with Bosnia on Saturday in a demonstration against EU migration policies.

What happened during the demonstration?

Demonstrators waved signs such as "Open the Borders" and "End the EU border regime." Most of the protesters were Italian, with activists also coming from Germany, Austria, Spain and Slovenia.

The demonstrators criticized Croatian police for the pushback of migrants trying to reach Western Europe and called for the abolition of the EU Frontex border agency.

No violent incidents between Croatian police and demonstrators have been reported.

What is the current situation for migrants in the Croatian-Bosnian border region?

More than 6,000 migrants are currently stranded in Bosnia. If they attempt to enter Croatia, an EU member state, they may be forcefully repelled by the Croatian police.

The Danish Refugee Council nonprofit has claimed migrants have been whipped, robbed and even sexually abused by Croatian border authorities. Human Rights Watch (HRW) has previously called on the EU to sanction Croatia over pushbacks.

Croatian authorities have denied allegations that they have used violent pushback strategies towards migrants coming from Bosnia.

The coronavirus pandemic has also worsened life for the migrants, as infections rise in Bosnian camps lodging the asylum-seekers and other migrants.

Some of the migrants in Bosnia live in formal accommodation centers, while others live in abandoned houses or makeshift camps near the Croatian border.

Migrants from the Middle East, Africa and South Asia are traveling through Europe to escape war and poor economic conditions in their home countries.

wd/sms (with reporting from the Associated Press)