Migrants wait for a chance to cross English Channel | Europe | News and current affairs from around the continent | DW | 30.07.2015

Migrants wait for a chance to cross English Channel

Thousands of people outside the French city of Calais hope to be among the few who successfully make their way to Britain. The situation is dramatic, but hardly a storming of the Chunnel, DW's Bernd Riegert writes. 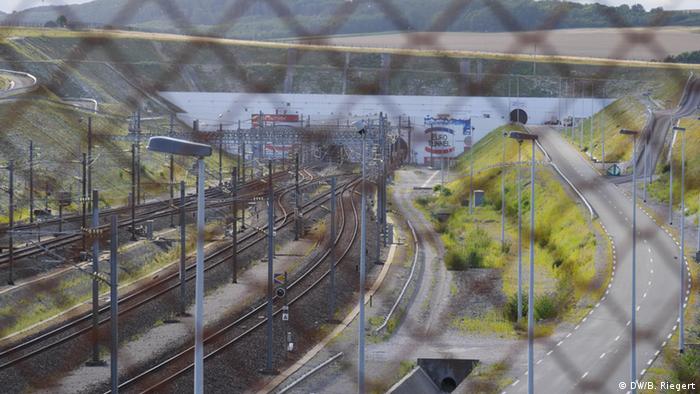 "Hey, let's go. Let's try it." In a subdued voice, a man calls a group of 30 migrants to follow him down a small dirt trail. The group of Africans had been waiting for several hours at a campfire in a small forest near the Eurotunnel premises.

Now, shortly after midnight, the man they paid to smuggle them across the border uses wire cutters to snip out a hole in the chainlink fence and then bends the barbed wired to the side.

The first man, wearing a red jacket, slips through the hole and climbs over the next three-meter (10-foot) steel fence. Eight more men quickly follow him - lit up by the floodlights of three television crews who are reporting on the situation at the channel tunnel.

After a few minutes, four police cars with blue lights flashing approach on the other side of the fence. The fences are equipped with sensors and every hole is reported to a control center close to the tunnels' entrance. As soon as the police arrive, the migrants retreat quickly - and peacefully.

Around 200 Eurotunnel security personnel and 300 French gendarmes are on duty. Hundreds of migrants try to pass through the area. About 100 to 150 of them managed to get over the fences and were apprehended by security officers, according to the Eurotunnel operators. It is unclear how many migrants successfully managed to jump onto a freight train or stow away on a truck and make their way to Britain. 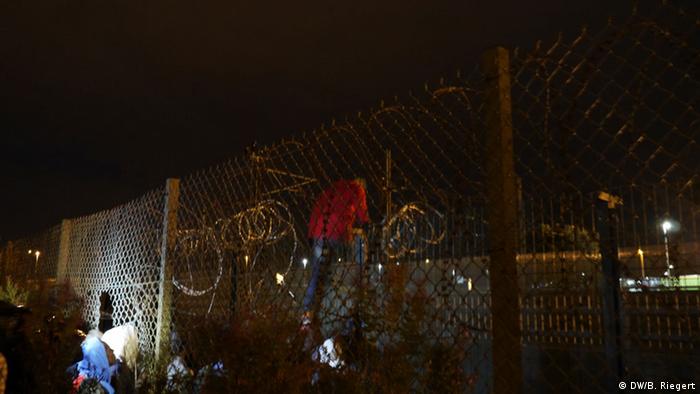 Well-organized groups of migrants have been trying for weeks to evade authorities along the fence or divert the police officers' attention so other migrants can slip through. This week was a particularly busy week: The French police said as many as 3,500 migrants had been arrested - but there had been no reports of violence.

For security reasons, the entrances to both tunnels in Calais have been intermittently closed. Sometimes, hundreds of migrants block one of the highway ramps or railway tracks. Such actions led to hour-long delays in the tunnel's shuttle service and to traffic jams in Calais, as well as on the other side of the English Channel in Dover.

French media say nine people have died in and around the tunnels since the beginning of June. The migrants have either been hit by trucks in the dark or they didn't survive the jump onto the freight trains. 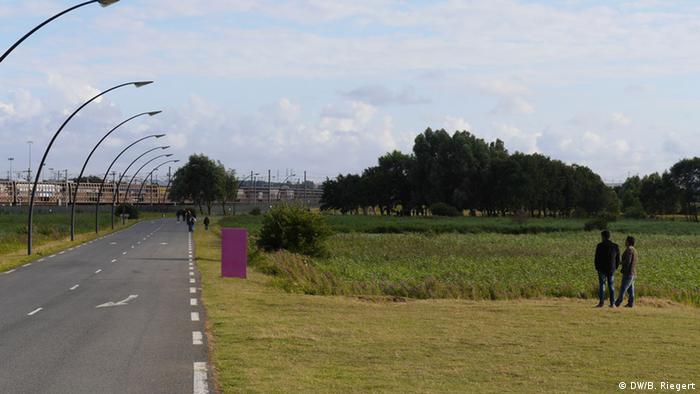 Hamid, far right, fled Syria and hopes to make his way to his wife in the UK

A migrant from Syria in his 40s who identified himself only as Hamid said he wanted to try crossing again at night. Together with his nephew, he had spent many months crossing Europe by land in the hope of reaching Britain.

He said he does not know what to expect there, or how the authorities will react if they arrest him.

For the past week, Hamid has been living in the makeshift settlement of sheds and tents that the migrants and locals in Calais call the "Jungle." Between 3,000 and 5,000 people are estimated to be waiting for a chance to leave the settlement and sneak across to Dover.

Every night they walk down the eight-kilometer (five-mile) road from the camp to the tunnel premises. Hamid and his nephew head out alone. They want to save the smuggler's fee, which can run up to hundreds of euros.

The road takes the migrants past a giant shopping center, cinemas and fast-food restaurants that have been built next to the tunnel for tourists. While the people living in abundance carry their full bags to their cars, others, with no possessions beyond than their clothes, scurry by toward the tunnel. The shopping center has a fitting name: Cité Europe (Europe City). 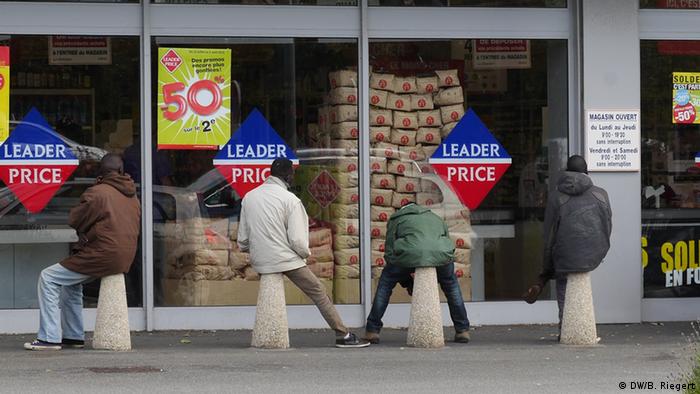 Aid organizations that provide free meals every day to several hundred migrants say the pressure has been growing as more and more people, mostly from Syria, Eritrea and Sudan, want to try their luck at the tunnel's entrance. The trucks that migrants hide themselves in are more checked more frequently by security forces, making it harder to stowaway in them.

"I know it is difficult and dangerous to enter the tunnel," Hamid said, shrugging his shoulders. "But I have no other choice. Or do you know a better way? Maybe at the harbor, by ferry?"

Dozens of migrants, including women and children camp out behind a discount supermarket near a road leading to the tunnels. The women still go to the supermarket during the day to buy some bread and drinks, but the security guards at the door no longer allow young African men to enter the building. 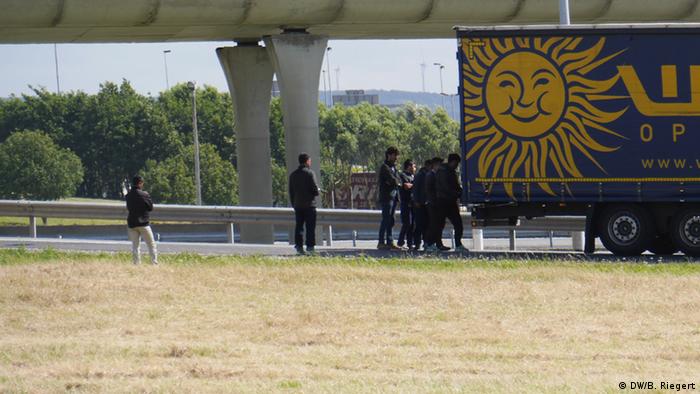 The head of the Eurotunnel Group, Jacques Gounon, however, sees things differently. He said Great Britain and France have to "take more care of the European problem of refugees." He has also called for financial compensation of almost 10 million euros for the high security costs.

Busy trying to survive, Hamid doesn't pick up on these political squabbles. He uses his cell phone to keep in touch with his wife in England. Tired, he sits down on the grass by the roadside after hours of waiting. He lights a crumpled cigarette butt and takes a deep drag.

As the refugee drama continues to unfold outside the Channel Tunnel, the UK is sticking to its consistently hardline stance on refugees and migrants. But is this helpful, asks Samira Shackle in London? (30.07.2015)

Refugees in Calais, France, have again tried to cross to England through the Channel Tunnel. Dozens of French police officers have been sent to the site to increase security as the situation worsens. (30.07.2015)

French, British and Eurotunnel officials are now struggling to control the influx of refugees into the Eurotunnel. Migrants have made more than 2,000 attempts to cross the route in the last 24 hours. (29.07.2015)

An Eritrean woman has died while trying to illegally cross the Channel Tunnel from France to the United Kingdom, a day after another migrant was found dead at the British end of the tunnel. (24.07.2015)

Migrant and refugee crossings of English Channel increasing, despite risks 06.08.2021

Despite tougher measures on both sides of the English Channel, asylum-seekers are still trying to make the dangerous crossing from France to the United Kingdom, in an attempt to find a better future.

France to reduce visas for Maghreb countries in migration spat 29.09.2021

Paris has accused former colonies of not doing enough to allow illegal immigrants to return. Algeria has summoned the French ambassador in response to the decision.

Interior Minister Gerald Darmanin told his British counterpart Priti Patel that she was "no longer welcome" at weekend talks. This follows Boris Johnson's decision to publish a critical letter to Emmanuel Macron.