As Israel continued to bombard the Hamas-governed Gaza Strip for a third day, Jochen Hippler, a German expert on the Middle East, told DW-WORLD.De the European Union bears some of the blame for the situation. 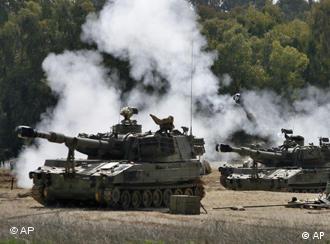 Jochen Hippler, a researcher and expert on the Middle East at the University of Duisburg-Essen's Institute for Development and Peace (INEF), told DW-WORLD.De in an interview that the current escalation in violence in Gaza would not help to bring about peace.

“We have a situation where one side is retaliating against the other and vice versa. The Palestinians will retaliate against Israeli violence and we have to solve this problem," he said.

Hippler said the longer that the violence continues, the more difficult it will be to come to a peaceful solution.

The European Union -- which has been the biggest sponsor of development projects within the Palestinian Authority, but has not wielded the political clout of the United States -- needs to step up to the plate when it comes to negotiating a workable initiative for peace, according to the Middle East expert.

“Europe has made a couple of mistakes in the last couple of years,” Hippler said. “Instead of respecting the elections (that brought Hamas to power) and dealing with someone they don't like, they've helped to trigger a kind of civil war among Palestinians. And you can't have peace with an opponent that is at war with itself.”

The EU's decision to upgrade bilateral relations between Israel and European Union member states in June has also stirred anger in the Arab world.

Hippler said finding a peaceful solution would have been easier 10 to 15 years ago. “The main challenge we face now is finding a permanent political solution. But there is no political will to do it.”

The EU, he said, could resolve help to reduce tensions by bringing Hamas to the table. “We have seen examples where negotiating with Hamas has been successful. But to achieve a ceasefire, the only way is to agree to a mutual ceasefire.”

Legitimate goal of peace will not be achieved

In any case, Hippler said, the official goals of Israel's military action -- to stop the rocket attacks --will not be met.

“It's a legitimate goal. The people of Israel have every right to live in peace as the Palestinians do. The problem is that this war will not change those attacks. The long-range effects will just be to start a new round of suffering, especially in the Gaza Strip and will motivate some militant people within Palestine to try and hit Israel any way they can.”

Israel has been bombarding targets in the Gaza Strip for three days now, claiming more than 300 lives. Deutsche Welle's Rainer Sollich wonders whether this is really the right way to defeat Hamas in the long run. (29.12.2008)

The European Union's top foreign-policy official on Saturday condemned as "unacceptable" the death of Palestinian civilians in Israeli air-strikes and called for an end to violence. The death toll is now over 270. (28.12.2008)