Flight MH17 was shot down over the Ukraine, killing the 298 people on board, on July 17, 2014. Many of the passengers were Dutch. Artist Ronald A. Westerhuis has created a monument in Amsterdam to remember the victims. 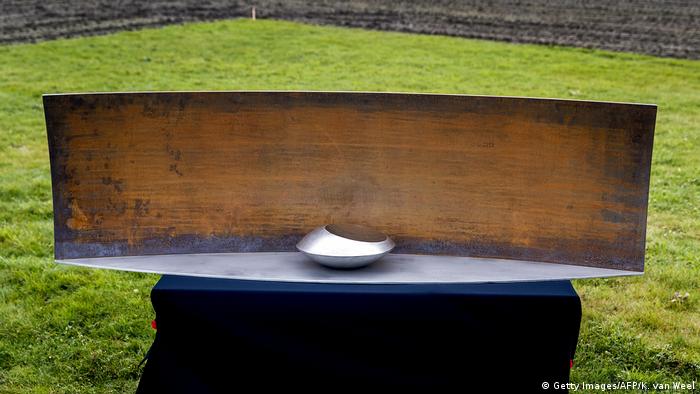 DW: The memorial that you created for the victims of flight MH17 is due to be unveiled near Schiphol airport in Amsterdam on the third anniversary of the plane being downed. What was it that personally moved you to create this monument?

Ronald A. Westerhuis: When the attack occurred, I was in Shanghai, and it struck me directly, like, two days after, that I wanted to do something with this horrible terror attack. I fly three to four times a month, so I'm always on an airplane, and really this is something that could happen to any of us.

What ideas did you have for this monument, and what was your reason for choosing the form we see now?

I wanted to make a monument where people can experience their sorrow, but also find hope. As an example I took three monuments. In Amsterdam there's a monument on the Dam Square, and for me it stands for national unity - ceremony - I think that's very important in a monument. The second was the Holocaust monument in Berlin. This is, you know, an abstract monument, an abstract sculpture. But because of the abstraction you can really feel the tension in the sculpture. Even if you don't know anything about the Holocaust, you can feel it. And the third one was the Vietnam Monument in Washington, D.C.; and this is recognition. If you walk past all the names of the Vietnam veterans, the Vietnam victims, automatically you start reading the last names. So it gives recognition.

And these were the three elements I wanted to put into this sculpture. I designed a large black wall - 16 meters long, four meters high - which for me represents the sorrow and the loss. And in front of that wall there's a stainless steel sculpture. There's part of it I took out, so it's the missing victims; and within the highest part I have engraved the names of all the victims. So that's the recognition. If you see the whole sculpture, it's like an eye looking into the sky. I want to make a connection between the survivors - the people, the families - and the victims up in heaven. Moving the sculpture into place

The assignment was to design a national monument, but for me this is an international monument. It has all the names engraved of all the victims, not only the Dutch. And for me the most important thing about this monument is: I made it for the relatives now, but when everybody passes in 50 years or 100 years, it should stand like a beacon for this horrendous deed. So it's also a remembrance for the future.

You've also talked about the materials you used for this monument. Could you say something about the special kind of steel you used, and why you chose this?

It's made of cotton steel, and the steel, when it rains, starts changing colors, as I also want to see the sadness changing. Also, when you use steel, steel deteriorates, so it disappears. I also want the sadness, one day, to disappear. This is, of course, a metaphor, because the steel is so thick, it will be here in another 500 years, but that was the metaphor I wanted to portray by using these materials. 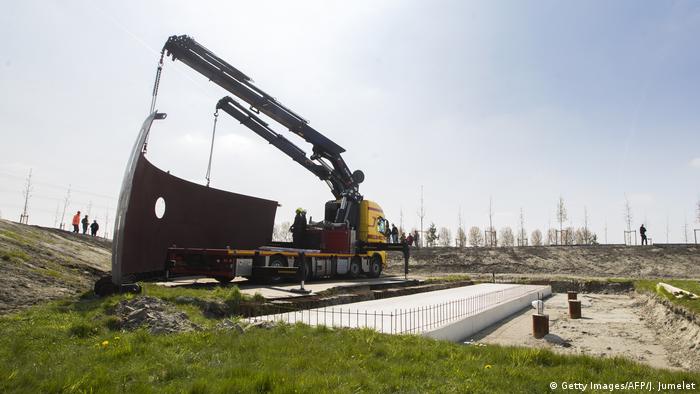 How do you think people, including the families of the victims, will receive this monument? Do you think it will help them, not to forget, but to come to terms with this attack?

Well, I've talked to a lot of relatives, and when the relatives will really find peace is when we finally know what exactly happened above the Ukraine. I think there are two parts. I think when the relatives really know what happened with their loved ones and who shot the rocket, that's one. I think to have the monument here - it's a place to remember, and it's a place that they can go and work with their sorrow and find their comfort. The monument is going to be opened by our king tomorrow, and it's three years since the attack … I think it will give their sorrow a place - there's a place to go.

What did the attack mean for the Netherlands? Was this a collective shock - or how would you describe it?

Yeah, totally. Because of the 200 Dutch victims, it affects 60 percent of our nation. So 60 percent of our people directly or indirectly knew people on that airplane. When all the bodies came back, when people saw all the hearses driving, everybody was standing by the roads. So for us this is the same as 9/11. If you talk with people about 9/11, everybody knows where they were, what they were eating, where they heard the news. And for the Dutch people MH17 is the same. If you ask, "Where were you when MH17 happened?" everybody knows.

Ronald A. Westerhuis is a Dutch artist. He mostly creates steel sculptures for public spaces.

The interview was conducted by DW's Kersten Knipp.