Mexico has issued arrest warrants for police and military personnel suspected of involvement in the 2014 disappearance of 43 students. The unresolved kidnapping case sent shockwaves across the country. 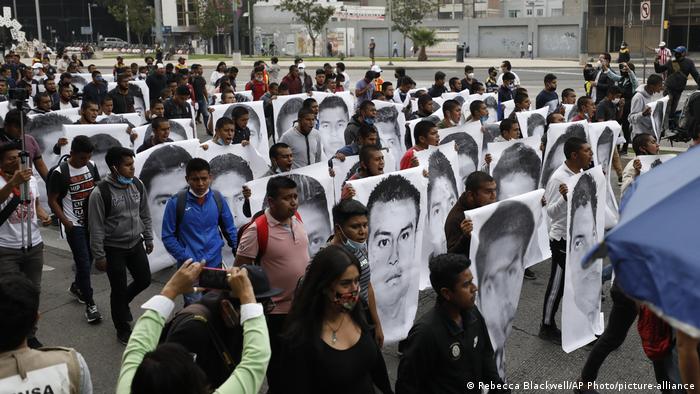 Mexico has issued arrest warrants for police and military personnel suspected in the 2014 disappearance of 43 Mexican college students.

President Andres Manuel Lopez Obrador announced the warrants on Saturday while presenting a report on the probe into the unresolved case that drew international criticism.

"Orders have been issued for the arrest of the military personnel," Lopez Obrador said at an event with family members of the missing students.

"Zero impunity — those proven to have participated will be judged," he added.

Omar Gomez, head of the special prosecutor's office for the case, told the media that the warrants had been issued for the "material and intellectual authors" of the crime, including the federal and municipal police.

Bone fragment of one of 43 missing students found in Mexico

The warrants come on the sixth anniversary of the disappearance that sent shockwaves across Mexico.

The students from the Ayotzinapa Rural Teachers' College disappeared on September 26, 2014, in the state of Guerrero, as they traveled to a protest in five buses. They were said to have been stopped by corrupt police in Iguala and handed over to a drug cartel.

Prosecutors had initially said the cartel mistook the men for members of a rival gang. They were killed and their bodies were incinerated at a garbage dump before being tossed in a river.

The remains of only two of the students have been positively identified so far.

Family members of the victims have long accused Mexican authorities, including the military, of involvement in the students' disappearance.

A panel of international experts has accused Mexico's government of undermining their probe into the fate of 43 trainee teachers apparently massacred in 2014. The report also alleges that several suspects were tortured.