Mexican authorities will investigate a video that appears to show a soldier executing a civilian. The government rejects a study that found that Mexico is the world's second most violent country - behind only Syria. 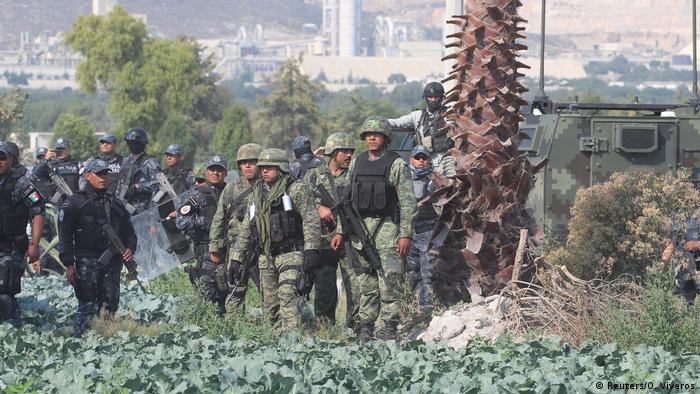 Mexico's Defense Ministry will investigate footage that appears to show a soldier kill a civilian. Taken May 3 in the town of Palmarito, the video sheds light on an encounter that left 10 people, including four soldiers, dead after the military confronted alleged fuel pipeline thieves in the central state of Puebla.

Apparently from a security camera, heavily edited footage shows the encounter, in which soldiers say the accused thieves used local residents as human shields. Toward the end of the video, a man is seen lying on the ground as at least three soldiers stand near him; after a flash is visible in the frame, the victim bucks and then his body goes still. "Conduct contrary to the law and human rights cannot be justified under any circumstances," the military announced in a statement late Wednesday.

According to rights groups, Mexico makes frequent use of extrajudicial killing. The National Human Rights Commission found that 22 people were executed and some tortured in a 2015 confrontation between police and an organized crime group that killed one officer and 42 other people.

In 2014, the commission found that soldiers had executed at least a dozen of 22 people killed at a warehouse in the community of Tlatlaya. The military had claimed that the victims had all died in a gunfight that left one soldier dead, but journalists found evidence at the scene that contradicted that version; the troops implicated in the killings were later absolved of the crime.

The military played an unclear role in the 2014 disappearance of 43 university students. The victims remain missing three years after they were taken hostage by police and turned over to criminals.

On Wednesday, Mexico's government responded to a report by the International Institute of Strategic Studies that classified the country as the world's second-deadliest country in 2016 - behind only Syria, where a civil war has raged for six years. The report is "without substance," according to the government. The London-based IISS tabulated 23,000 homicides for Mexico in 2016 - ahead of Afghanistan and Iraq, with 17,000 and 16,000, respectively - but far behind Syria's 50,000.

"The report attempts to give similar treatment to nations with completely different phenomena that are not comparable or appreciable to each other." Mexico's foreign and interior ministries claim.

The ministries charge that putting  Mexico's drug war on a par with larger domestic conflicts is "irresponsible and incorrect." Organized crime "is a regional phenomenon" that extends far beyond Mexico's shared borders with the United States, Guatemala and Belize, according to the ministries. "The fight against transnational organized crime should be analyzed in a holistic manner," they charge.

Wild Horses and the Mexican Border