A report by Mexico's human rights commission has criticized the investigation into the deaths last year of 43 student teachers. Basic data had not been collected and investigations not carried through. 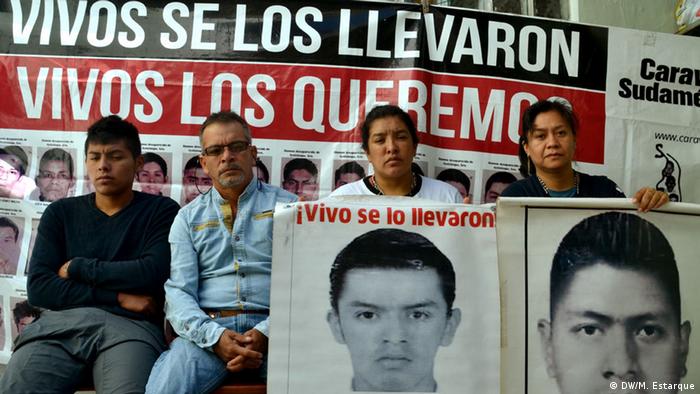 The report published by the National Human Rights Commission (CNDH) found the attorney general's office has only identified the remains of one of the 43 students. It had not compiled basic information about the victims, who were probably abducted and murdered by a drug gang working with corrupt police officers. Eleven suspects in the case had not been properly investigated according to the CNDH.

CNDH commissioner Jose Trinidad Larrieta has urged prosecutors to widen the investigation and the report made a total of 32 observations and proposals to federal, state and local authorities involved in the case.

The disappearance of the young, poor trainee teachers in the south western city of Iguala last September "has proven the depth of barbarity ... the abandonment of the law and the neglect of justice" in Mexico, according to the CNDH president Luis Raul Gonzalez. He said that Mexico was not the same since the events in Iguala.

The CNDH condemned the use of arbitrary detentions and torture to obtain confessions and criticized the lack of testimony from people involved.

The commission indicated that prosecutors had only used statements from 36 soldiers at the Iguala barracks, instead of interviewing everyone who had been in the area. The army had not assisted in the search for the students.

According to the official account, during the night of September 26 last year students at a rural school for teachers were attacked on the orders of the then mayor of Iguala, Jose Luis Abarca.

Six people died, including three students, and 43 students were detained by local police before being handed over to member of a criminal gang who are believed to have killed them and burned their remains.

However, the families of the victims do not believe the official report and insist that the alleged role of federal forces in the case be investigated.

President Enrique Pena Nieto is under fire for this case, and also because of the escape of drug lord Joaquin "El Chapo" Guzman from a maximum security prison for the second time.

At least 15 people have gone missing after an armed group briefly took control of the town of Chilapa in southwest Mexico. The town is at the center of a turf war between two rival drug gangs. (20.05.2015)