Mexican authorities said they'd opened the truck's trailer after they heard screams and pounding inside. The discovery by authorities comes two weeks after 600 migrants were found in two semi-trailers in Veracruz. 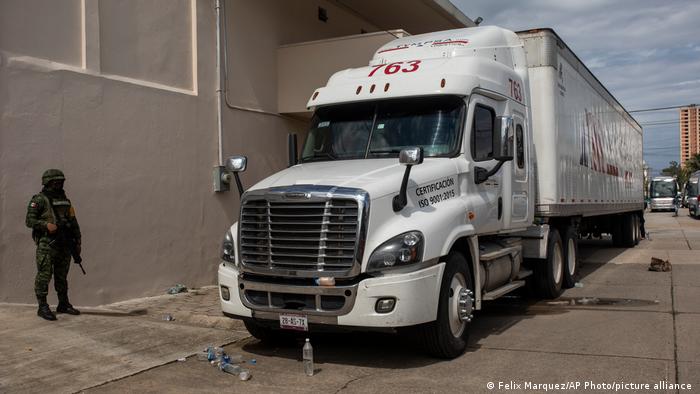 Mexican immigration authorities said in a statement Friday they had rescued 210 migrants from the back of a packed truck in the central-southeastern state of Puebla.

The truck had failed to stop at a checkpoint near the Esperanza municipality early on Friday.

The 210 migrants were found amid metal scaffolding, blankets and air conditioners by authorities after a pursuit ended near the city of Tecamachalco.

Authorities said they heard screams coming from inside the truck when they opened the cab. The migrants included children and adults of various nationalities.

The driver of the truck will likely face human trafficking charges. Both the driver and the vehicle are now in prosecutors' hands.

Two weeks ago, Mexican authorities found 600 migrants in two semi-trailer trucks in the state of Veracruz.

Thousands of people from Central America, Haiti and other countries have been traveling in caravans through Mexico in an attempt to find stable work and immigrate to the United States.

This week, Mexico began implementing new policies to overhaul its processing of migrants on its southern border — including speeding up humanitarian visas and moving migrants to other states in Mexico.

The United States also said on Thursday it would re-implement its "Remain in Mexico" policy for asylum-seekers. The measures, which began under former President Donald Trump, forced migrants looking to claim asylum in the US to wait out their cases in Mexico.