Mesut Özil's resignation from the German national team has sparked reactions in social media from all over Europe and beyond. However, Özil's Germany teammates have largely remained silent. 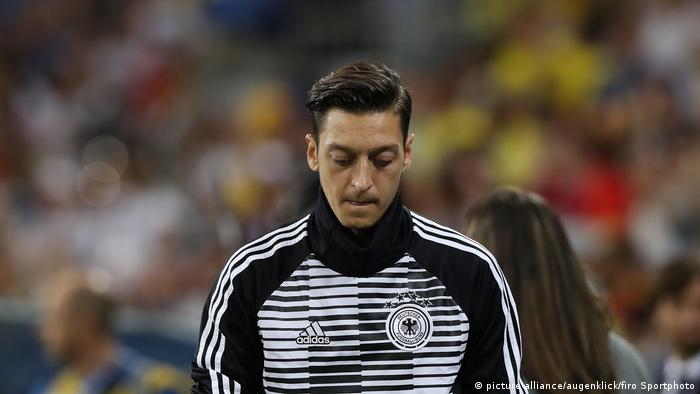 "It was a pleasure, Abi," tweeted Bayern defender Jerome Boateng after Mesut Özil's resignation from the national team, noting the European under-21 title that they won together in 2009, as well as their World Cup title four years ago. This is the kind of friendly gesture that is common practice these days whenever a friend or teammate leaves. Regardless of the political debate that Özil triggered with his three Twitter posts, Germany on Sunday lost one of their best players of recent years.

While the resignations of Philipp Lahm, Bastian Schweinsteiger or Lukas Podolski a few years ago triggered veritable floods of social media messages, in Özil's case, it is at best a trickle.

"Thank you for everything you‘ve done for German football. You can be proud of your many achievements," wrote Julian Draxler on Instagram.

Antonio Rüdiger also chimed in, thanking "one of the best footballers I ever played with" via Twitter. Of his teammates from the 2014 Germany team that won the World Cup in Brazil, only Lukas Podolski commented. The forward, who is currently playing out the twilight of his career in Japan, recalled many "funny moments" they'd had together with the national team.

As for the rest, neither the captain of that World Cup-winning side, Philipp Lahm, nor Bastian Schweinsteiger nor any of the others have reacted publicly to Özil's resignation.

His Arsenal teammates Per Mertesacker and Shkodran Mustafi  have also maintained their silence, but the English club has welcomed him back.

Özil is currently off touring Singapore with the Gunners.

You also might have expected his former classmates and teammates at Schalke, Benedikt Höwedes or Manuel Neuer to have posted a few lines – bit you would be wrong.

What of course can't be ruled out is the possibility that any one or more of the above players or others has reached out to Özil with a phone call or a fax. However, this seems rather unlikely in this age of social media. That's a shame, because, in Özil, Germany have lost one of the most controversial but also best footballers the national team has seen in recent years.