All three finalists for the Ballon d'Or award as player of the year come from Spain's Primera Liga. Three German World Cup winners failed to make the final cut. 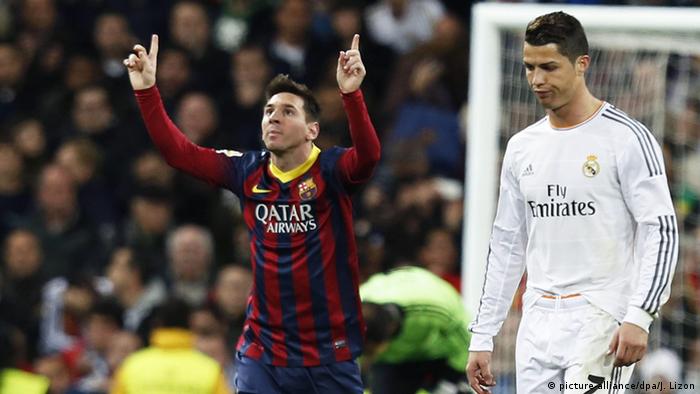 Ballon d'Or holder Cristiano Ronaldo (pictured, above right) of Real Madrid was joined by two members of FC Barcelona on the three-man list of finalists unveiled at a FIFA gala on Monday. Neymar has made it to the final three for the first time, alongside Barcelona teammate and perennial finalist Lionel Messi (above, left). Ronaldo has captured the award as the world's best player for the past two years running, after Messi had dominated the trophy, having previously won the Ballon d'Or four times in a row.

Three members of the German team that won the World Cup in Brazil in 2014, Bayern Munich goalkeeper Manuel Neuer, his high-scoring teammate, Thomas Müller, and Real Madrid midfielder Toni Kroos had all been in the running but failed to advance to the final three.

Bayern's Pep Guardiola on the other hand, is one of the three finalists in the race for coach of the year, alongside Chile's Copa America winner Jorge Sampaoli and Luis Enrique of Barcelona.

The only German to be included among the finalists is Celia Sasic of the women's national team. She is joined by Carli Lloyd of the US squad that won the World Cup in Canada this past summer, as well as Aya Miyama of finalists Japan.

Jill Ellis of the US, Norio Sasak of Japan and Mark Sampson of England are the finalists in the category of coaches of women's teams.

Also unveiled on Monday were the three finalists for the FIFA Puskas Award for the "most beautiful goal of the year." In the running are Alessandro Florenzi of Roma, Wendell Lira of Brazilian side Athetico GO Goianesia and Lionel Messi.

The winners are to be announced at a gala in Zurich on January 11.