German Chancellor Angela Merkel is in Greece for the first time since the start of the financial crisis. Intended to be a gesture of solidarity, the trip will not be a meeting of equals. 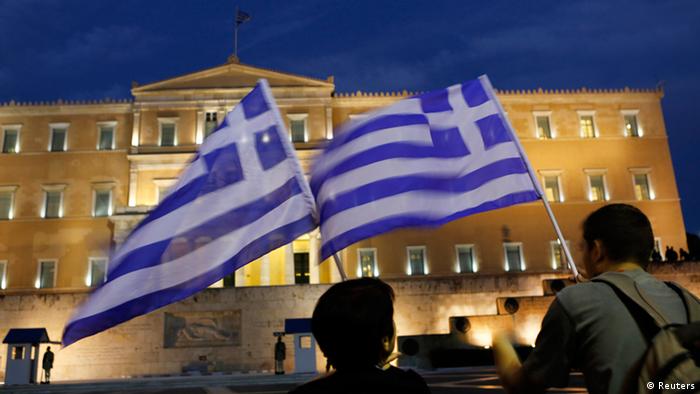 German government spokesman Steffen Seibert called it an entirely normal visit when he announced the trip - like a visit to Rome or Madrid. It's supposed to be a demonstration of solidarity and close friendship.

The last time Merkel was in Athens was in 2007, one year before the Lehman Brothers bank went bust and the financial markets forced Greece to the brink of government bankruptcy. Those aren't the best conditions for a routine visit, especially when one considers the relationship between the two countries.

After all, it will not be a meeting among equals. Arriving in Greece, Merkel will be checking to see if everything is in order in a country where chaos prevails. In Merkel's view, Germany - under her command, of course - has been the eurozone nation that has responded to the financial crisis in exemplary fashion, as a country of social solidarity, as Merkel described it in August, which reacts to social program cuts and stagnating wages with calm. Entirely unlike the Greeks, with their impassioned mass demonstrations, violent outbursts, obstinate strikes and the startling images of fire and destruction on television.

A velvet glove and an iron fist 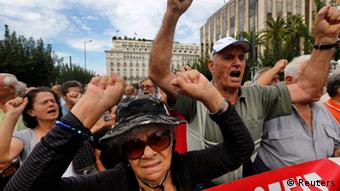 Greeks are up in arms over Merkel's upcoming visit

The chancellor stresses that she has done everything right, and she advises Greece to do the same. Merkel has insisted in the past months and weeks that Athens implement the reform measures required by the EU to streamline its budget. But her heart bleeds when she sees the cuts to civil servants' and employees' pensions, she said during a recent discussion.

In the run-up to her visit to Greece, Merkel's finance minister, Wolfgang Schäuble, threatened to cut off the money supply if the Greeks did not show progress. Some of her fellow Christian Democrats (CDU) and MPs are likewise demanding that she put pressure on Greece.

"She needs to do some straight talking there and make the options clear to the Greek government," CDU deputy caucus leader Michael Fuchs told the Reuters news agency.

Merkel has repeatedly and impressively promoted financial aid for Greece in the past. From a Greek perspective, there is little to admonish her for. She clearly campaigned for Greece in her government declaration on February 25, when the second aid package for the country was passed by the German parliament. And she spoke out against skeptics who wanted to see Greece exit the eurozone.

"Europe wins when the euro wins," she said at the time, adding that the common currency wins when it's based on solidity, growth and solidarity. However, Merkel's pragmatism wins out when she campaigns for Greece to stay in the eurozone. "The risks involved in possible Greek bankruptcy are imponderable," she said. "My oath of office prevents me from such adventures." 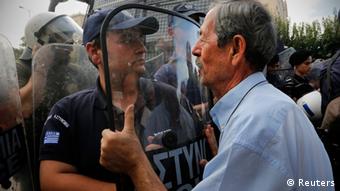 Some 7,000 police officers are said to be ready for Merkel's visit

The aid recipients may not be thrilled by such comments. Collages of Merkel sporting a Hitler moustache or swastika armband have been appearing on Greek posters and publication covers. The last election campaign saw populist parties inciting anti-Merkel sentiment.

Accordingly, Greeks now seem to be agitated. Authorities in Athens are allegedly drumming up some 7,000 police officers to keep the situation under control during Merkel's state visit. The last time the Greek capital saw such a contingent of police was in 1999 during a visit by US President Bill Clinton, when Greeks were up in arms over NATO airstrikes on Serbia. Don't the Greeks like Merkel?

Or do Germans not like Greeks? Germany's biggest and most opinion-mobilizing tabloid, Bild, continually conveys the image that Greece is home to a lazy, incompetent population riddled with corrupt politicians who are blowing Germans' hard-earned money - and are ungrateful to boot. As proof, Bild reprinted the Nazi-Merkel pictures created by Greeks.

It's a carousel of agitation that keeps the German-Greek relationship in constant motion. And one that members of the CSU - sister party to Merkel's CDU - are particularly good at provoking. CSU secretary general Alexander Dobrindt recently predicted that the Greeks would soon be paying with the drachma again. "We should weigh all of our words carefully," Merkel responded.

'Obviously more than a bilateral meeting'

Angela Merkel's visit to Greece is long overdue, but it's sending a positive signal. The visit is key to restoring a bilateral relationship and to move forward in the Euro crisis, says analyst Janis Emmanouilidis. (08.10.2012)

With the first session of the governing body, the eurozone's finance ministers have inaugurated the permanent rescue fund ESM in Luxembourg. How does the new firewall against the mountain of debt work? (08.10.2012)

Spain traveling down the road to success

Though Spain may request a loan from the European bailout fund, the country is taking the steps necessary to turn around its economy, according to Walther von Plettenberg of the German Chambers of Commerce for Spain. (07.10.2012)