Merkel warns against Greek debt default | Germany | News and in-depth reporting from Berlin and beyond | DW | 26.09.2011

Chancellor Angela Merkel has stressed the importance of maintaining investor confidence in the eurozone through policies aimed at preventing state defaults even as her own coalition frays over the future of Greece. 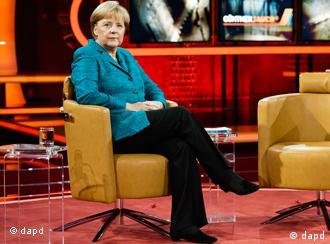 Merkel spent an hour laying out her thoughts on TV

German Chancellor Angela Merkel has said that allowing Greece to default on its debt could trigger a domino effect within the eurozone that would destroy investor confidence in the currency union.

"What we can't do is destroy the confidence of all investors mid-course and get a situation where they say that if we've done it for Greece, we will also do it for Spain, for Belgium, or any other country," Merkel said in an interview with ARD television on Sunday.

"Then not a single person would put their money in Europe anymore," she added.

Merkel said, however, she would not rule out the possibility that one could manage "the insolvency of a state just like a bank" once the eurozone implements its permanent bailout fund, the European Stability Mechanism, in 2013. 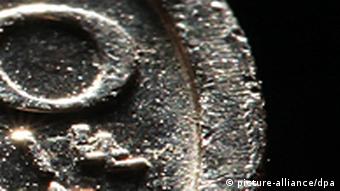 Investor confidence in the euro could diminish if Greece defaults

Currently, the eurozone manages the bailouts of highly indebted member states such as Greece through the temporary European Financial Stability Facility (EFSF), which has 440 billion euros ($590 billion) at its disposal.

In July, the 17 members of the eurozone agreed on a series of measures that would expand the EFSF's power by allowing it to buy government bonds, help bail out banks and quickly loan money to troubled countries.

On Thursday, the German parliament is set to vote on these measures. Although they are almost guaranteed to pass parliament - with the backing of the governing parties as well as the opposition - there has been growing speculation that some euro-skeptic members of Merkel's own coalition could break rank and vote against expanding the EFSF's power.

Merkel, a Christian Democrat (CDU), has faced growing opposition to her handling of the debt crisis from her coalition partners - the Christian Social Union (CSU) and the economically liberal Free Democrats (FDP).

The chancellor has expressed confidence that she would not have to rely on the support of the left-of-center Social Democrats (SPD) and Greens in order to pass the measures.

"I want my own majority and I will fight for this," Merkel said.

European officials consulted with the International Monetary Fund and World Bank over the weekend in a bid to calm market fears that the sovereign debt crisis could lead to a series of defaults within the eurozone. (25.09.2011)

The Group of 20 major economies have vowed to take powerful action to stabilize the struggling global economy. European shares have rallied on the back of rescue hopes but Asian markets continued to fall. (23.09.2011)

Financial markets slip back into the danger zone, warns IMF