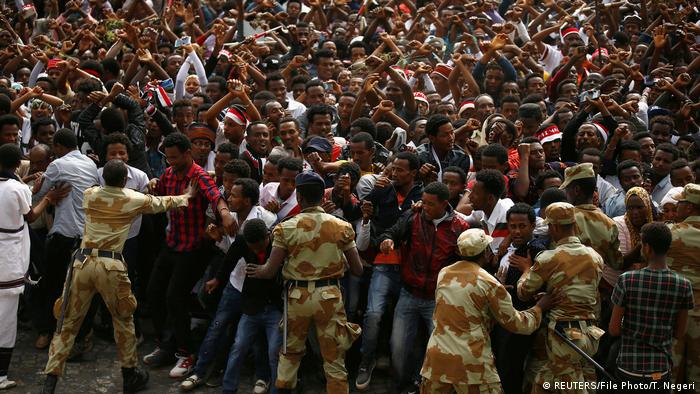 German Chancellor Angela Merkel signaled support for protesters demanding wider freedoms in Ethiopia during a visit to the country on Tuesday, saying "a vibrant civil society is part and parcel of a developing country."

When Merkel set foot on Ethiopian territory she entered a country that is a non-permanent member of the UN Security Council and boasts a contingent of 8,000 troops on UN peacekeeping duties. Ethiopia's capital Addis Ababa hosts the headquarters of the 53-nation African Union (AU) to which Germany is a regular contributor. Half a billion euros ($557 million) were transferred from Berlin to Addis Ababa between 2004 and 2016, a third of which went to the AU's "peace and security" division.

There is another side to Ethiopia. As the Ethiopian Prime Minister Hailemariam Desalegn stretches out his hand in welcome on her arrival, Merkel may well reflect that this same government leader imposed a six-month state of emergency on his country just two days earlier. He blamed the measure on months of popular unrest.

Rights groups say more than 500 people have been killed in protests in Ethiopia's Oromiya region since last year when anger over a development scheme for Addis Ababa turned into broader anti-government demonstrations focusing on politics and human rights abuses. The unrest has included attacks on businesses, many of them foreign-owned, including farms growing flowers for export.

One Ethiopian official claimed unrest was being fomented outside the country. Government spokesman Getachew Reda said on Monday there was "ample evidence" that Egypt was providing training and financing to the Oromo Liberation Front, which Ethiopia classifies as a terrorist organization. Egypt and Ethiopia are locked in a disoute over a hydroelectric dam which Ethiopia is building on the Nile River. Egypt says the project wll reduce its shareof the river's flow.

Ethiopian journalist Tesfalem Waldyes told DW the state of emergency was not unexpected as the government had already deployed troops in the two largest regions, Amhara and Oromiya."If the troops are deployed in the country, then you already have a state of emergency," he said. Sunday's announcement was "a way of legalizing what they have been doing for the last few months." Ethiopia has witnessed an unprecedented rise in popular dissent in 2016

Attorney General Getachew Ambaye said the decree would permit authorities to stop and search and also detain suspects without court authorisation, as well as carry out house searches.

It also bars the "preparation, distribution and exhibition of material that could incite chaos", he said in an official announcement.

"Failure to observe the measures would lead to imprisonment for a period of five years," the attorney general added.

Mulatu Gemechu, deputy chairperson of the opposition Oromo Federalist Congress, said the unrest could worsen if security forces were to be granted more powers and expand their presence in Oromiya.

"These are peaceful protesters who have been demanding that soldiers are pulled out. This could intensify anger," he said.

Just over a week ago, scores of people were killed in a stampede triggered when police used teargas and shot in the air to disperse anti-government protesters at a religious festival in the town of Bishoftu. 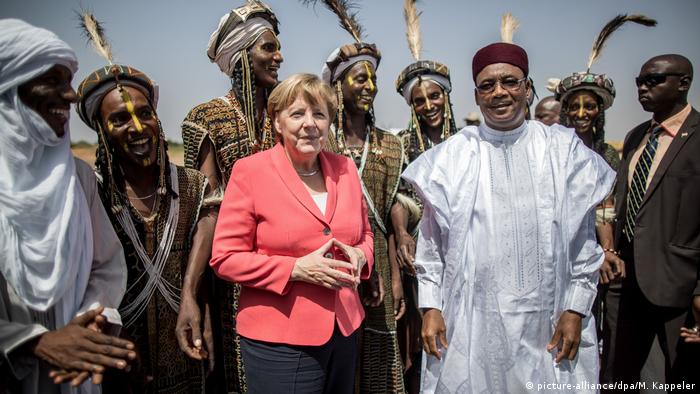 Before arriving in Ethiopia, Merkel held talks in Niger with President Mahamadou Issoufou

Chancellor Merkel is scheduled to meet representatives from civil society and the opposition on Tuesday afternoon.  There is, however, little doubt where power in Ethiopia resides."The government has successfully weakened the opposition parties" Waldyes said. It also "passed a new law after the 2005 elections which effectively paralyzed most of the civil society organizations in the country."

Merkel arrives in Ethiopia after visiting Niger, a major transit point for African migrants making their way north to Europe. The German chancellor faces pressure at home and elsewhere in Europe to stem migration flows.

Brussels at odds with Germany over future migrant deals

EU Minister Johannes Hahn has called out the German government for saying African transit countries could receive the same migrant deal as Turkey. Hahn and Chancellor Merkel will travel to Africa this week for talks. (08.10.2016)