Merkel steps up cooperation with Indonesia

During her visit to Indonesia, Chancellor Angela Merkel and President Susilo Bambang Yudhoyono have developed ties to cooperate more closely in defense, the economy and the environment. 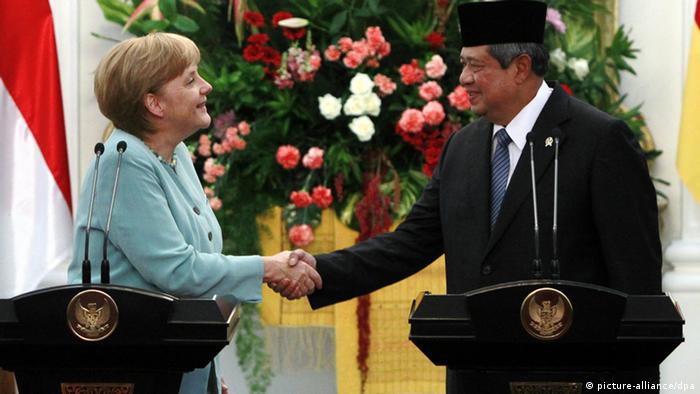 Merkel and the Indonesian president signed the Jakarta Declaration during the German chancellor's first visit to Indonesia since 1995. The agreement aims to take bilateral ties "to a higher comprehensive level," enabling the two countries "especially to develop our strategic cooperation together," Merkel said at a news conference.

Germany and Indonesia will also strengthen defense cooperation, although no concrete deals were included in the declaration. President Yudhoyono expressed an interest, however, in German Leopard 2 tanks, made by German manufacturer Krauss-Maffei Wegmann.

"We'll be very open and transparent about this," Yudhoyono told reporters, adding that Indonesia's military equipment needed updating and that Germany was one of the partners Indonesia could turn to for supplies.

Being in Indonesia did not keep Merkel away from her most pressing issue - the eurozone crisis. She told reporters that German growth would slow down this year because of weaker exports to budget-battling neighboring countries.

She then praised Indonesia, which managed to slash its debt from 80 percent of GDP to 24 percent in a matter of years, for its fiscal achievements. 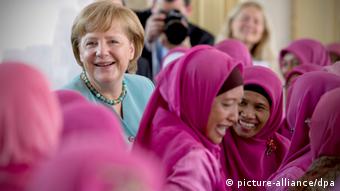 Merkel visited a church and a mosque

"I think that's an example of what can be achieved and what Europe has to achieve, especially given the fact that Indonesia was able to achieve this over a short time, in fact in a few years."

During her trip to Indonesia, German Chancellor Angela Merkel will visit the site of the GITEWS tsunami early warning system - a joint project with the potential to save millions of lives. (10.07.2012)

On the second day of her visit, Merkel went to the tsunami early-warning center in Jakarta. Opened last year, the center had been built with support from Germany worth 50 million-euros.

"I believe that we can cooperate more closely in science and research, and the tsunami warning center is but one example of that," she told reporters.