German Chancellor Angela Merkel has said that she was "shocked" by footage of clashes between police and protesters in Turkey. Turkish ministers again struck a bullish tone in calling for people to avoid demonstrations. 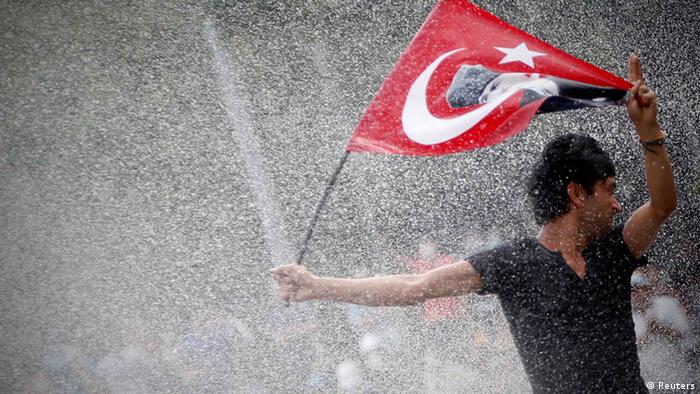 Chancellor Angela Merkel said on Monday that she was "shocked, like many other people," by the images of police and protesters clashing in Turkey since May 31.

"There were some terrible images, in which one could see that, in my view, too hard a line is being taken," Merkel said in an interview broadcast on RTL television before her departure for the G8 summit in Northern Ireland. "What's happening in Turkey at the moment does not in my view reflect our understanding of a freedom to demonstrate, freedom to express an opinion."

The chancellor also told RTL that the German government "will in no event take part in weapons deliveries" to war-torn Syria. "What's important is that a political process gets started. This [situation] will not be solved by military means alone," Merkel said, adding that she did not think that Germany's stance put it "offside" in relation to NATO allies like the US, France or Britain - which support sending weapons to opposition fighters.

Merkel made no comment when asked on potential consequences for Turkey's ambitions to eventually join the European Union, although a conservative ally of hers from Bavaria broached that topic in Munich on Monday.

"I can only speak for myself: We are against Turkey's full membership," Bavarian State Premier Horst Seehofer, the leader of the Bavarian CSU sister party to Merkel's Christian Democrats, said at a meeting of the party's top officials. "And I believe that the pictures and information we have received in recent days only serve to support this further."

Two of Turkey's largest trade unions called on members to strike on Monday to show solidarity with the protests. This followed major police operations to quell public demonstrations on Sunday. A representative of the Turkish bar association in Istanbul said police in the city detained 441 people on Sunday. The lawyers' association in Ankara said a further 56 were arrested in the capital.

After the strike was called, Turkey's interior minister told union members not to heed the call to protest.

"I am calling on public workers and laborers to not participate in unlawful demonstrations - otherwise they will bear the legal consequences," Interior Minister Muammer Guler said. "Our police will be on duty as usual."

Deputy Prime Minister Bulent Arinc, meanwhile, appeared on television on Monday saying the authorities would use "all their legally available means" to stop the demonstrations. Arinc said that, if necessary, armed police or the military could be deployed.

Police on Monday had cordoned off central Istanbul's Taksim Square, which has become the focal point of more than two weeks of protests. The unrest first started in Gezi Park, with public demonstrations against plans to develop one of the city's few green retreats. Once park occupiers faced police intervention on May 31, protests spread across Istanbul and other parts of Turkey. Riot police on Saturday emptied the park, ending an 18-day sit-in.

Five people, including a policeman, have died in the unrest; a Turkish rights group reports that roughly 5,000 people have been injured.