Merkel reaches across Germany′s political divide | Germany | News and in-depth reporting from Berlin and beyond | DW | 30.09.2013

German parties often form coalitions by sticking to one of two camps. A joint CDU/CSU and SPD government is unusual, as it ignores party alliances represented by the colors red and green versus black and yellow. 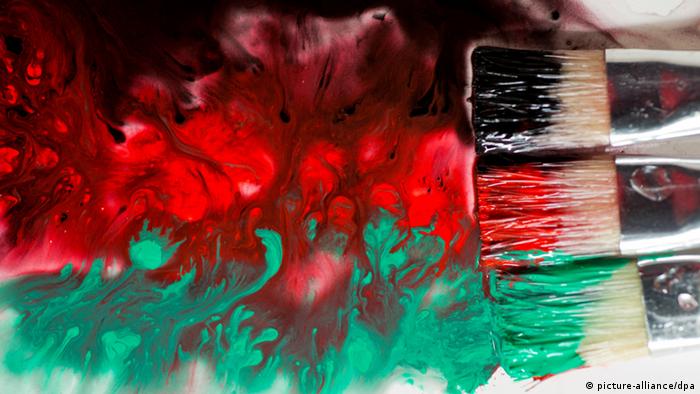 The morning after her party won strong support in Germany's September 22 election, Angela Merkel had to pause for a moment when getting dressed. She has her trademark blazer in every shade, but not every color would have been the right thing to don as different colors are associated with different political parties - and therefore possible coalition partners for her future government. "I thought: You can't wear read, bright green won't work. What should I do?"

She ultimately settled on a politically inconspicuous teal in order to avoid speculation that she was sending a signal ahead of negotiations to form a coalition with another party.

Chancellor Merkel's conservative Christian Democrats (CDU) along with its sister party, the CSU, are looking for a fitting coalition partner. One thing is certain. Yellow's out - the color associated with the liberal Free Democrats (FDP), who served as the chancellor's coalition partner until the most recent election. The party has failed to even make the five percent threshold required to get into parliament and so will not be represented in parliament for the next term. 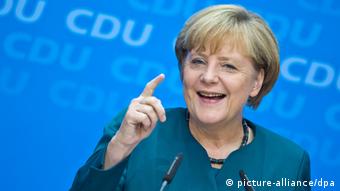 The Christian Democrats will have to venture beyond their own political camp in order to form a government. That's what the CDU/CSU did in 2005 when it entered into a grand coalition with the Social Democrats (SPD), Germany's second largest and symbolically red party.

It was three decades ago that former CDU chairman Heiner Geissler coined the expression of Germany's political parties being divided into camps. That was when the Green party emerged as a political player to be taken seriously.

In the 1980s, the Greens upped the number of parties on the federal stage from three to four, espousing divergent views and values. Geissler classed the conservative CDU/CSU and the business-friendly FDP as being in one camp, while the left-leaning camp was made up of the Green party and the SPD.

Geissler believed that forming a majority in parliament depended primarily on support within the two political camps and that winning votes from the other party in the camp was a zero sum game. 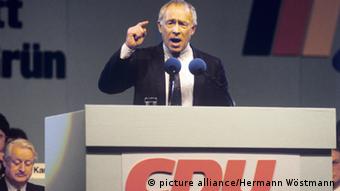 Since Geissler first discussed his theory, Germany's governments have, in fact, been formed largely along the lines of the two camps. The most recent election in September proved no exception. The CDU/CSU tapped the FDP as coalition partner, while the SPD had hoped to win a majority together with the Greens.

"The CDU/CSU has an interest in forming a coalition. So it's clear that the party is now pushing for its potential coalition partner to leave behind old ways of thinking," political scientist Uwe Jun told DW.

Both SPD and Green party are playing hard to get though.

"There may be strategic considerations there on the power distribution, but in general, it's difficult for a significant part of the base to imagine forming a coalition with a partner from the other camp," said Jun, who doesn't see any signs that the camps may break up any time soon.

However, pragmatic dissenters are out there. The Green parliamentarian Omid Nouripour has urged his party to be more open in the future. He believes the Greens poor showing in September's election was a result of its alignment with the SPD. In light of the Social Democrats' poor poll numbers in the run up to the election, voters may have assumed the Greens would be part of a losing ticket. 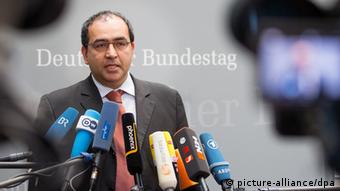 Nouripour believes the Greens' proximity to the SPD cost them votes

Dresden-based political scientist Werner Patzelt would nonetheless like to see a coalition between the Christian Democrats and the Greens. "Then all the politicking and debates concerning political camps would just come to a halt for a while," he said. "The options for coalitions would increase, and that would serve the function of a parliamentary government system to its utmost!"

But others see take the opposite view, noting that a democracy thrives primarily on clearly-defined alternatives.

Most experts expect a cross-party coalition, likely between the CDU and SPD. "The SPD has been pragmatic in the past, and it is currently governing at the state-level with the CDU with few problems," said Jun. "But the Greens have not had any good experiences in coalitions with the CDU/CSU. The sole coalition of that kind in Hamburg failed."

On the other hand, the SPD had less than a positive experience following its last grand coalition with the CDU/CSU at the federal level. At the end of those four years, it lost a dramatic number of votes. 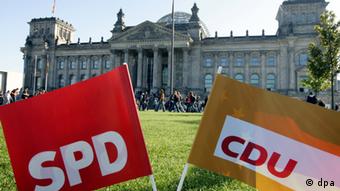 A grand coalition is the most likely scenario

New elections as the last resort

Should no coalition come about, the German constitution would allow the CDU/CSU to act as a minority government. But Merkel has already ruled that out. Without a majority behind her, she would have virtually no room to maneuver - especially since the Bundesrat, the Upper House of German Parliament that plays a significant role in the legislative process, is dominated by the left-leaning camp of the SPD and Greens.

Should no one manage to gain a majority and have themselves elected as chancellor, there is one last resort: new elections. But it's considered unlikely that the parties will let it come to that. If it does, however, Angela Merkel might just have reason to throw her red and green blazers out entirely in case she then would win an outright absolute majority.

Opinion polls were against Peer Steinbrück, Germany's Social Democratic candidate for chancellor from the start. Now, Merkel's former challenger has announced his retirement from politics. (27.09.2013)

Angela Merkel is extremely frugal with her emotions, and her speeches aren't overly arousing. But many Germans feel comfortable with her and yearn for continuity. How does all this fit together? (25.09.2013)