Merkel Pledges to Keep Africa on International Agenda | Europe | News and current affairs from around the continent | DW | 24.04.2007

German Chancellor Angela Merkel said Tuesday that the world's industrialized countries do not need to set new goals to help the developing world but keep the promises they have already made.

The developed world needs to work at meeting the goals set two years ago at the Group of Eight of the world's most industrialized nations in Gleneagles, Merkel said after a meeting Tuesday in Berlin with British Prime Minister Tony Blair and former UN Secretary-General Kofi Annan.

"We cannot stagnate now," said Merkel, who currently holds the presidency of both the G8 and European Union, titles that lend her a wide degree of international agenda-setting power. "We have made clear there will be continuity. We are going to take things up where Gleneagles ended."

One of the targets that emerged from the Gleneagles summit was a promise to double development aid to Africa by 2010. Merkel said that vow should be fulfilled before new promises are made at the German G8 summit in June, where she has promised to make Africa a major topic.

Merkel: The goals have been set 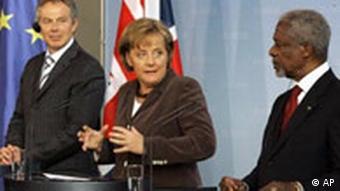 "We do not need to hold any additional conferences now to define goals," she said. "Now we need to make a certain amount of progress."

Merkel highlighted the use of micro-credits in Africa, adding that not only the amount of money reaching the continent was important but also the instruments used to distribute it.

Blair said Europe would suffer from "poverty, conflict, mass migration and the spread of terrorism" if it did not act to help solve Africa's problems.

"There has been an immense amount of progress, but we know there's a tremendous amount that has yet to be done," Blair said. "There are far too many Africans who die when their death is preventable with the right help."

Annan said international efforts to aid Africa needed to continue and pointed out that many of the continent's nations broke free of their past military rulers. The former UN head is now leading the African Progress Panel, which is set up to monitor industrialized nations progress on reaching development targets.

"Unless we step up our efforts ... we will not make the (Gleneagles) target," he said.

Annan said he believed war in Europe was now unthinkable and that he hoped that in a generation the same would be true in Africa. 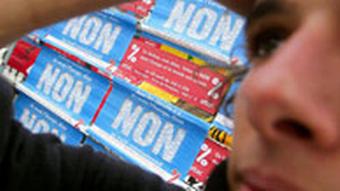 In addition to development aid, Merkel and Blair also discussed differences within Europe on the stalled constitutional process.

Blair said the intention had always been to "come back" to the constitutional issue after a "period of reflection" following the rejection of the constitution by French and Dutch voters in referenda two years ago.

"It's fairly obvious that in Europe there are different perspectives and different positions," the outgoing prime minister said. "We've got to see whether it's possible to reach agreement to allow Europe to work effectively and move forward."

The British government is pressing for a new treaty to improve the functioning of Europe's institutions rather than to write a full constitution.

Merkel has made clear her intention to propose political guidelines for an EU treaty incorporating the key reforms at the European Union summit in June.

By calling it a "treaty," the current German EU presidency has begun reviving the stalled approval process for a new constitution for the union. But not everyone is happy about the strategy. (24.04.2007)

G7 leaders are examining a new package of actions aimed at increasing pressure on Russia over its war in Ukraine. Ukrainian President Volodymyr Zelenskyy appeared by video to appeal for more help.