German Chancellor Angela Merkel has arrived in India on a three-day visit that will focus on trade and investment. The resumption of a stalled India-EU free trade agreement is likely to be one point of discussion. 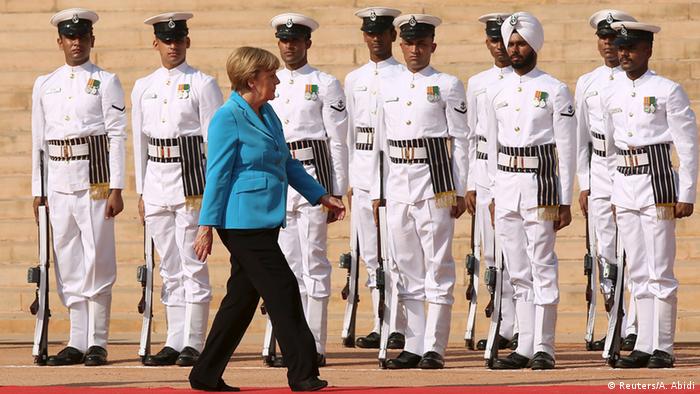 Merkel, who received a welcome with military honors on her arrival at the presidential palace in the Indian capital, New Delhi, opened her visit by saying that Germany wanted to support India's economic development in a number of fields.

"The prime minister has a very ambitious economic development program for India and Germany intends to contribute to it and support it," Merkel said, mentioning agriculture, economy, defense and internal security as some of the areas in which the two countries could cooperate.

The chancellor and Indian Prime Minister Narendra Modi have now met for talks in the third round of inter-governmental consultations.

Diplomats from both sides said that talks would center on boosting bilateral trade and investment, and on how to move forward with an India-EU free trade pact.

Among other things, the leaders will discuss an agreement for a joint solar-energy project with an investment volume of 1 billion euros ($1.12 billion).

It is Merkel's first visit to the country since Modi and his right-wing Bharatiya Janata Party took power one-and-a-half years ago, though the chancellor met the Indian prime minister in April on his first official visit to Germany. India was the partner country at this year's CEBIT technology trade fair in Hanover.

Merkel is being accompanied by the German ministers of Foreign Affairs, Food and Agriculture, Education and Research, and Economic Cooperation and Development, who will all be meeting their Indian counterparts.

Germany is already India's most important trading partner in Europe, though it ranks just 25th on the ladder of countries with which Germany has business ties.

On Tuesday, the German delegation will travel to the southern technology hub of Bangalore for talks with business leaders there.

In an interview with the Indian newspaper "Hindustan Times," German Foreign Minister Frank-Walter Steinmeier offered some advice for India if it wanted to boost foreign investment.

Although Steinmeier voiced praise for Modi, whom he said was steering the country in the right direction, Steinmeier urged India to improve its fiscal and tariff system in order to make investments easier, stressing that German businesses in India needed more legal security to function smoothly.

"A reliable legal and administrative framework is indispensable for German companies in India," he said

Foreign companies in India often feel hampered by levels of taxation, corruption and other obstacles to doing business.

Among other things, Steinmeier called for the introduction of a nationwide sales tax as "a big step forward."

Chancellor Angela Merkel was forced to fly in a military cargo plane after her official plane broke down ahead of a trip to India. Merkel is in the country to boost bilateral trade in defense, technology and automobiles. (04.10.2015)

India is far behind schedule in its plans to give its 1.2 billion citizens access to high-speed broadband Internet. Prime Minister Narendra Modi will have to do a lot more to prove his critics wrong, says Shivam Vij. (29.09.2015)

India has reported strong economic growth in the latest quarter. However, analysts say growth may not be fast enough, in light of the catch-up necessary in a country where so many people remain very poor. (31.08.2015)