German Chancellor Angela Merkel has officially opened the world’s biggest annual high-tech trade fair. She was joined by her counterpart from Poland, which is this year’s partner country at CeBIT. 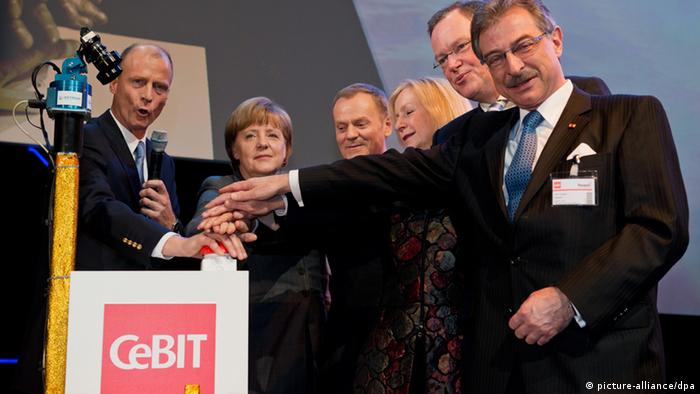 Chancellor Merkel (pictured second from left) stressed during her speech to open the trade fair in the northern city of Hanover that Germany should not only rely on its auto and machinery industries to create economic growth.

"We still talk about creating growth without really having an answer as to where this growth is going to come from," the chancellor told 2,500 invited guests. "We have to ensure that we develop a start-up culture," she said. "The IT industry is without doubt one of the possibilities and one of my dreams ... is to create the same founding conditions for all small IT companies everywhere in Europe."

The CeBIT trade fair kicks off in Hanover

Polish Prime Minister Donald Tusk (pictured third from left), whose country is to feature prominently at this year's edition of CeBIT, called on the European Union to look for ways to promote innovation throughout the 27-nation bloc.

"The debt crisis, the financial market crisis, is not the only problem. We have to fight the crisis but day in, day out, but we have to provide answers to the questions of how to secure the competitiveness of Europe," Tusk said.

Deutsche Messe, the organizer of the IT fair, said around 4,100 exhibitors from 70 nations had booked space for this year's CeBIT. That's about the same as last year, but far below CeBIT's peak when around 8,000 firms took part in 2000 - just before the Internet bubble burst.

However, CeBit remains by far the world's biggest information technology trade fair. Last year it attracted around 350,000 visitors, around twice as many as attended either the Consumer Electronics Show in Las Vegas or the Mobile World Congress in Barcelona, according to Deutsche Messe spokesman Hartwig von Sass.

The trade fair, which opens its doors to the public on Tuesday, runs through Saturday.

It's the time of the year when CeBIT turns Hanover into a Mecca for the digital world. For the coming week, some 4100 companies from 70 countries will show the digital world's latest trends. (04.03.2013)