Officially, nominating Jean-Claude Juncker as European Commission president is not up for discussion in Harpsund, Sweden. But the meeting conspicuously unites Merkel with three of Juncker's more prominent opponents. 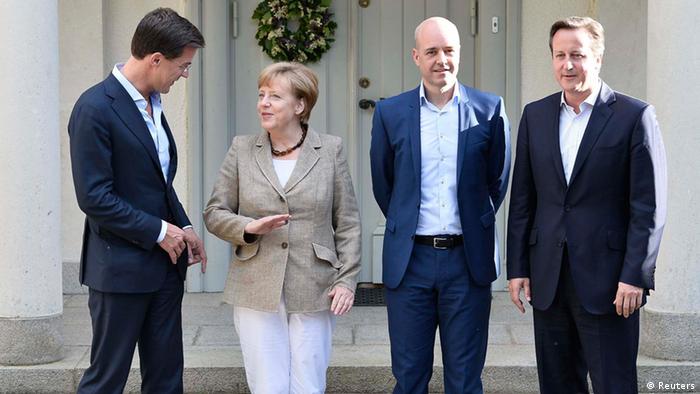 "It certainly should not be expected that we discuss personnel issues here," Chancellor Angela Merkel said on arrival in Sweden on Monday evening.

The Swedish government similarly said that the "nomination problem" for the top job in the European Commission would not be solved before the next EU leaders' summit at the end of the month.

Cameron, perhaps the most outspoken opponent of Juncker, also telephoned Italy's Matteo Renzi, Hungary's Viktor Orban and Reinfeldt in the run-up to the meeting, seeking to cement his case for an alternative appointment.

"I would just make this important point of principle, which is that, as the democratically elected leaders of Europe, we should be the ones who choose who should run these institutions, rather than accept some new process, which was never agreed," Cameron said after reaching Harpsund.

Juncker was the nominal lead candidate in last month's European Parliament elections for the center-right European People's Party (EPP) alliance, which includes Merkel's German Christian Democrats. Party blocs put forward lead candidates for the European Commission presidency as part of a bid to give the elections a "face" and boost turnout. The EPP emerged as the strongest single faction in the vote, but fell well short of a majority.

Bluff or gambit? The referendum threat

Sweden's Reinfeldt has not issued a direct criticism of a Juncker appointment, but did say in a Financial Times interview that the proposed process would exclude other strong candidates for the post. He also discussed a threat from Cameron, who had said that a proposed British "in/out" referendum on EU membership might have to be brought forward if Juncker were appointed. Cameron had promised the referendum for 2017, if he could win re-election next year. Although it's not clear whether Cameron could arrange such a natonwide vote before general elections - on May 7, 2015 - Reinfeldt spoke ahead of the summit about the UK's importance to the European Union.

"I see a great risk with such a referendum," Reinfeldt said on Swedish television. "It would be bad for the EU and Sweden if Britain does not remain in the EU. A key task is to ensure that they do - they are needed for the internal market to work better and to create a competitive economy."

Despite advocating heavy reform of the EU, Cameron is broadly believed to oppose Britain leaving the bloc. Many observers interpreted his initial EU referendum promise as a response to the domestic electoral threat posed by the explicitly anti-EU United Kingdom Indepedence Party (UKIP), which outperformed Cameron's Conservatives at the European elections.

Merkel has said that she stands by Juncker as the man who should become European Commission president, but has also repeatedly said that negotiations would continue. In her government address last week, Merkel chastised German politicians arguing that she should steamroll Juncker's appointment through regardless of Cameron's position. Politicians treating the threat of a British EU exit with "ambivalence" were being "wantonly negligent," Merkel said, in comments criticizing both allies within her party and the rival Social Democrats.

European Parliament party blocs, including the center-left Socialists and Democrats (S+D), who finished second to the EPP, have voiced their support for Juncker's nomination. By the EU charter, any incoming commission president replacing Jose Manuel Barroso when his term expires in October would require majority approval from both the European Parliament and the EU's 28 heads of government.