Meeting in Berlin, Chancellor Merkel and John Kerry lauded the US-German alliance. But, 25 years after the fall of the Berlin Wall, they also acknowledged the threat to peace posed by the ongoing Ukraine crisis. 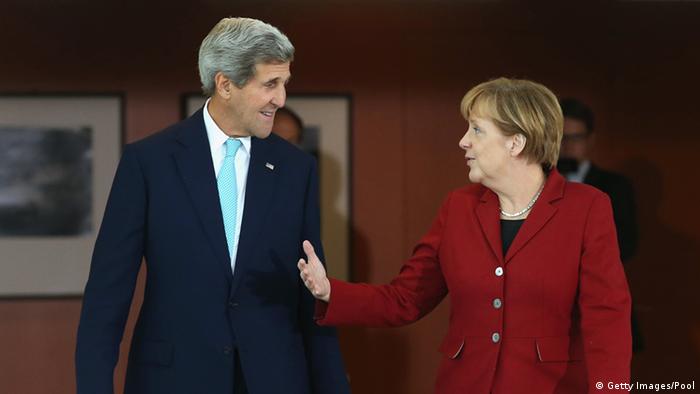 Welcoming US Secretary of State John Kerry in Berlin, German Chancellor Angela Merkel said the two countries were acting "in close partnership" on crises ranging from the Ebola outbreak to the battle against the "Islamic State" (IS) group.

She said there were a number of international issues on the list for her and Kerry to discuss - among them, the war against IS, Iran's nuclear program, Ebola, Afghanistan and the conflict in Ukraine.

"And all of these can only be mastered by us if we work together, if we act in close partnership and coordination with our partners and friends in the United States of America," her welcoming remarks read on the website of the US State Department.

The friendly tone gave the impression that the recent NSA spying scandal, which has considerably strained US-German relations, was all but forgotten.

"Thank you Madam Chancellor," Kerry responded. "President Obama, our administration, the American people have great respect for your leadership, and we appreciate enormously what Germany is doing on every single issue of critical importance today."

Remembering the fall of the Berlin wall, the 25th anniversary of which will be celebrated in just over a fortnight, Kerry continued:

"I'm also mindful that I'm coming here today where I visited the old wall and met with some of your young kids who were asking questions about the future, none of whom had been born during that period of time. They were all post-Cold War.

"And so even as we celebrate the fall of the wall and all that it symbolizes, it was very clear to me today, as it is to America, that the story of Germany is not the past - it's the future, and what you are doing to define that future, leading Germany on so many issues to be a global leader."

Earlier in the day, Kerry met with his German counterpart, Frank-Walter Steinmeier, for talks on Ukraine and the threat posed by IS.

"The world is at risk of losing its bearings," Steinmeier told reporters after his talks with Kerry. "There is still enough explosiveness in eastern Ukraine to threaten political stability on our continent," he went on.

"It is our task to prevent Europe from ever becoming divided again," Steinmeier said, words that fell on receptive ears from his counterpart.

"We call for an end to Russian aggression in Ukraine," Kerry said, expressing hopes that the disputed country could one day function as a "bridge between Russia and the West."

With the fallout from the conflict in Ukraine renewing fears of a diplomatic meltdown with Russia, Kerry and Steinmeier used the occasion to recall the symbolic significance of November 9, 1989, the day the Berlin Wall was opened.

"For years, the Wall was a burning glass of the Cold War," Steinmeier said, imploring that the lessons learned during that dramatic time period not be forgotten. "Without the unconditional support of the United States, it wouldn't have been possible to bring an end to the division. Germans will not forget what the Americans did."

Opinion: Ukraine-Russia diplomacy is at an impasse

Talks in the Ukraine crisis have deadlocked. Russia is refusing to be swayed by the persistent negotiations, and it is difficult to see a way out of the conflict, says DW’s Bernd Riegert. (17.10.2014)

Fighting between Ukrainian government forces and pro-Russian rebels is intensifying over the Donetsk airport, prompting dialogue between Moscow and Washington and straining a month-old ceasefire in Ukraine. (03.10.2014)