Merkel Increases Leverage in Dresden Vote | Germany| News and in-depth reporting from Berlin and beyond | DW | 03.10.2005

In Dresden, Germany's final district to vote, Angela Merkel's conservatives extended their lead over Gerhard Schröder's Social Democrats, giving her the edge in the power struggle over who should become chancellor. 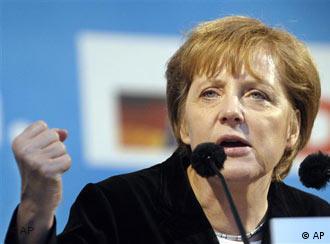 The conservatives won an additional Bundestag seat in Dresden

Results from the poll in the eastern city of Dresden showed that the conservatives will widen their three-seat advantage in parliament over Schröder's SPD by another one seat. Andreas Lämmel led with 37 percent, while Marlies Volkmer of the SPD received 32.1 percent.

After the inconclusive general election on Sept. 18, the new results mean that the CDU will hold 226 seats in the Bundestag versus 222 for the SPD.

CDU candidate Lämmel said the voters had sent a clear signal to Berlin, and specifically the German chancellor.

"What this means for Gerhard Schröder is that it's time for him to pack his bags and move back to Hanover," he said.

"We will definitely begin a new round of exploratory talks with the SPD on Wednesday," agreed CDU General Secretary Volker Kauder. "I think progress will be made." He also stressed that were Schröder to back down, the talks would be far likely to reach a speedier conclusion. "We expect the SPD to see sense," he said. "The results in Dresden obviously strengthen Angela Merkel's position and send a clear signal to the SPD."

Germany held its general election two weeks ago but the vote was postponed in Dresden's first district due to the death of a candidate from the neo-Nazi NPD party.

CDU leader Angela Merkel, aiming to become the Germany's first female chancellor, is expected to exploit the gains in the bitter power struggle that ensued after both she and incumbent Chancellor Gerhard Schröder claimed to have a mandate to lead the country. 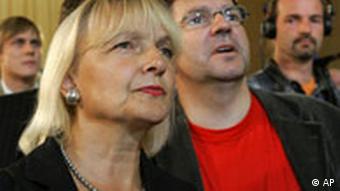 The German Social Democratic Party candidate Marlies Volkmer, left, watches with a canvasser the announcement of the first election results in the city hall in Dresden, eastern Germany, on Sunday, Oct. 2, 2005.

Despite the inevitable disappointment, the Social Democrats weren't despairing after Sunday's poll. While their candidate wasn't directly elected, they won most of the second ballots that German voters place for a party, rather than the local contender.

"If the SPD is the strongest party in Dresden, then that strengthens the party nationally as well -- in the initial coalition talks and the later negotiations," stressed Marlies Volkmer.

The country has been at a political impasse since the September poll, with both Schröder and Merkel claiming a mandate due to the knife-edge result. While the outcome of the Dresden vote doesn't significantly alter that result, Germans expect it will give the conservatives a psychological edge heading into the next round of coalition talks. 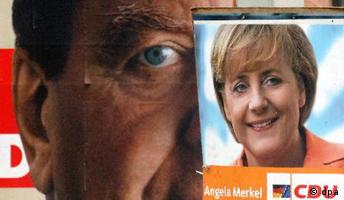 Some 219,000 registered voters in Dresden were called to the polls to decide the final make-up of the Bundestag, with three seats at stake. More than 72 percent of eligible voters had cast ballots, election officials said after the polls closed at 6:00 p.m.

The high turnout reflected how seriously Dresden residents took the election. On Friday, around 5,000 people showed up at a final campaign rally held by the SPD, while almost 1,000 attended a simultaneous event held by the CDU. But while it looked then as though Schröder had the lead, Sunday's result told a different story.

Roland Koch, the conservative premier of the state of Hesse, said the vote confirmed the CDU and their Bavarian sister party, the CSU, as the strongest bloc in parliament, and said that it should choose the next chancellor.

SPD chairman Franz Müntefering stuck to the course of the past two weeks, saying the Dresden result would not have any effect on the coalition talks with the CDU and CSU. The SPD's party leaders will meet Monday night, while the next round of coalition talks is scheduled for Wednesday.

German Chancellor Schröder and his conservative rival Merkel are back on the campaign trail Friday ahead of a delayed vote in Dresden on the weekend which will complete the inconclusive general election. (Sept. 30, 2005)

As coalition talks continued, Chancellor Gerhard Schröder and rival Angela Merkel hit the campaign trail one last time ahead of Sunday's delayed vote in Dresden, attacking each other as unqualified to lead the country. (Oct. 1, 2005)

Read DW-WORLD's coverage of Germany's election and its consequences