The leaders of Germany and France met in Paris for talks ahead of a crucial European summit in Brussels. But central questions were left answered, inviting further speculation about what Thursday's meeting will bring. 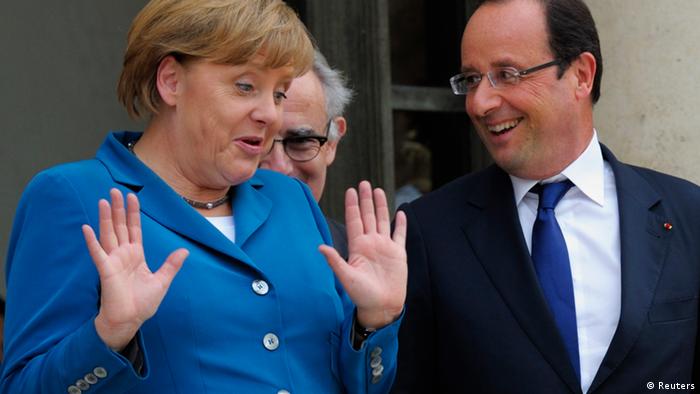 German Chancellor Angela Merkel held last-ditch talks with French President Francois Hollande late Wednesday , a day before a much-anticipated EU summit, but the German leader made it clear she had no intention of altering her opposition to pooling eurozone debt.

However, both sides highlighted their willingness to find common ground in particular areas in statements ahead of the talks in Paris.

"We both want to deepen economic, monetary- and in the future political-union, to arrive at integration and solidarity," French President Francois Hollande said, adding that the eurozone required "integration as much as necessary, solidarity as much as possible."

Merkel also expressed optimism about the prospects of the talks that will take place on Thursday.

"Significant progress has already been made regarding the growth pact," she said, referring to a plan to invest up to 130 billion euros ($162 billion) in kickstarting eurozone economic growth," Merkel said.

But there was no mention of either side being ready to cede ground on key bones of contention: Hollande did not address the question of whether Paris would back intensified European political integration. And Merkel made it clear she would not support any suggestions of introducing eurobonds to pool European debt before she even hit the ground in Paris.

"Guarantees and controls must go hand-in-hand. There can only be joint liabilities when sufficient controls have been put in place," Merkel told the German parliament ahead of the talks on Wednesday.

"Apart from the fact that instruments like eurobonds, eurobills, debt redemption schemes and much more are not compatible with the constitution in Germany, I consider them wrong and counterproductive."

The exchange leaves key questions about whether European leaders can find a common solution to the eurocrisis unanswered on the eve of Thursday's talks.

At the meeting in Brussels, EU leaders will once more attempt to agree on a strategy to tackle the European debt crisis which has compelled Greece, Portugal, Ireland, Spain and now Cyprus to ask for bailouts. They will, in addition, discuss the possibility of a "growth pact" worth 130 billion euros, which is anticipated to stimulate job creation as well as budgetary savings.

Representatives are also anticipated to try and hammer out a strategy to more closely integrate the bloc's financial sectors.

A show of unity