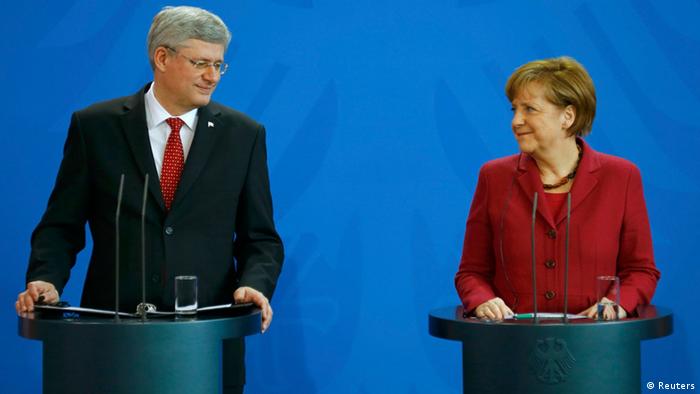 Merkel told reporters in Berlin on Thursday that she hoped the current threat of further sanctions against Russia for its annexation of Ukraine's Crimean peninsula would be enough to keep Moscow in check.

Her remarks came during a visit to Berlin by Canadian Prime Minister Stephen Harper.

Merkel added that she was counting on the European Union to prevent Russian President Vladimir Putin from making further incursions into Ukraine, and that the bloc would take action if necessary.

"I hope that we won't reach that point," said Merkel. "Russia needs trade and exchange … that is why Russia stands to lose a lot. And that is why I am quite calm."

The EU last week sanctioned 12 officials linked to Russia's takeover of Crimea, bringing the total number blacklisted to 33. The bloc has said it would consider further punishment, should the situation escalate.

Germany, along with several other EU nations, relies heavily on deliveries of Russian oil and gas. Amid concern that the bloc's tension with Moscow could have negative energy consequences, Merkel said it was time for Europe to reform its energy policy.

"There will be a new look at energy policy as a whole," she said.

After holding talks with the German chancellor, Harper reiterated Canada's stance that Russia should not return to the Group of Eight industrialized nations unless Putin changed course.

Leaders from the G7, which does not include Russia, agreed this week to suspend Russia's participation in the G8 following the Russian intervention in Crimea.

"Personally - and I only speak for Canada here - I don't see any way of return for Mr. Putin to the table unless Russia fundamentally changes its course."

In a shift away from the crisis in Crimea, Merkel said that the pending free trade deal between Canada and the EU would provide good opportunities for both countries.

"I think that will make a huge contribution to trade with the EU and thus Germany growing again," she said.

As a "resource-rich" country, Canada was a "very interesting partner" for Germany and the EU, Merkel added.

The EU and Canada agreed in the fall to establish an economic and trade agreement (CETA) that is expected to come into force next year.

Merkel said she was "very happy" that the "substantial hurdles" to reaching the CETA agreement had been overcome.

The deal would eliminate 98.4 percent of tariffs on merchandise trade; get rid of industrial tariffs within seven years; and make more than 90 percent of EU agricultural exports duty-free.

The EU has proposed new sanctions against Russia, as US officials plan to announce theirs on Wednesday along with G7 and other partners. Several more European states have expelled Russian diplomats.