Merkel calls for ′bilingualism and integration′ for Turkish immigrants | Germany | News and in-depth reporting from Berlin and beyond | DW | 29.03.2010

In talks with the Turkish prime minister, German Chancellor Angela Merkel supported the idea of Turkish language instruction in Germany, though not at the expense of German. They also discussed Iran and Turkey's EU bid. 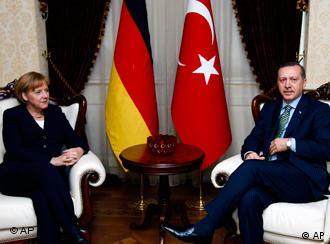 German Chancellor Angela Merkel softened her stance against Turkish schools in Germany at the start of a two-day visit to Turkey on Monday, stressing the need for "bilingualism and integration," not "assimilation."

Her comments came during talks in Ankara with Turkish Prime Minister Recep Tayyip Erdogan. Merkel supported the existence of Turkish language schools in Germany, pointing out that many schools were already teaching the language in Germany, and said such programs should be expanded.

However, she stressed that these programs should not serve as an excuse for Turkish immigrants to forgo the study of German. She said both languages should be taught, highlighting the importance of bilingualism and the integration of immigrants into German society.

"What is unacceptable is for this to be an excuse for Turks living in Germany not to learn the German language. The language of the country one lives in is the precondition for good integration," said Merkel, stressing that the goal was not assimilation.

"This is about everybody keeping their roots, their culture and their belief, but those of the third and fourth generation living in Germany should be able to participate in our social life."

About 3 million Turks live in Germany, the largest group of Turks living outside Turkey. 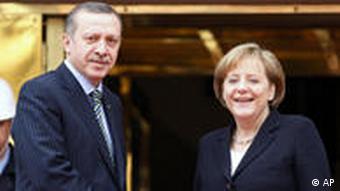 Merkel has toned down her opposition to Turkish schools in Germany

Merkel also urged the EU-candidate country to open its ports to Greek Cypriot ships and planes, saying the Cyprus issue stood as a major barrier to Turkey's EU ambitions.

As part of its membership negotiations, Ankara had previously signed an agreement, known as the Ankara Protocol, to allow vessels from Cyprus into the country. Despite the agreement, Turkey still bars any ships or planes from the EU member from entering the country.

The chancellor has previously stated that, rather than full EU membership, she would prefer to see Turkey be given a "privileged partnership" with the bloc.

Despite a strong rejection of this suggestion by Turkish officials, Merkel said on Monday that the accession talks will continue. Turkey began EU membership talks in 2005.

The two leaders also touched on the topic of how to deal with Iran's nuclear program, with Merkel saying the international community may have to consider stronger measures.

"If Iran does not in the end show transparency over the question of nuclear energy, we must also consider sanctions," she said.

Turkey has been developing its trade and political relations with Iran in recent years, and Erdogan said he was against the possible measures.

"We are of the view that sanctions are not a healthy path and that the best route is diplomacy," he said.

German Chancellor Angela Merkel has arrived in Ankara, where she is expected to discuss contentious issues with the Turkish prime minister. Merkel heads to Istanbul on Tuesday for the conclusion of her two-day trip. (29.03.2010)

For German-born children of foreign parents, the choice between citizenship in their birth country and their parents' is a difficult one. Three German states proposed to allow them to keep both, but were denied. (26.03.2010)