German Chancellor Angela Merkel is in Washington for a two-day trip likely to be dominated by the crisis in Ukraine and the NSA spy scandal. It's her first visit since it was reported she was targeted by the agency. 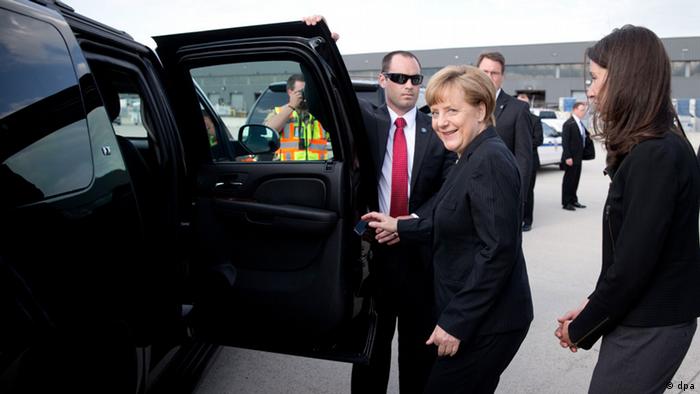 Merkel was scheduled to arrive at the White House late Friday morning local time, where she was due to hold talks with US President Barack Obama.

The two leaders are expected to discuss additional sanctions against Russia, which stands accused of intervening in the escalating unrest in eastern Ukraine and failing to uphold the terms of an international deal aimed at ending the crisis.

Both the European Union and United States have leveled penalties against Russian individuals and companies and are now considering expanding sanctions to directly target the Russian economy.

A White House spokesman said: "They will continue their close coordination on sanctions that impose costs on Russia for its ongoing violation of Ukraine's sovereignty and territorial integrity as well as for its failure to follow through on commitments made in Geneva on April 17.

So far the EU and the US have put forward a shared stance on the sanctions issue, although some US lawmakers have suggested Merkel should consider tougher penalties.

Transatlantic relations experts suggest that a number of European countries, including Germany, who have closer economic ties with Russia, may be reticent to take a tougher stance for fear of reprisal measures.

However White House spokesman Jay Carney denied Washington and the EU had clashed over the sanctions issue.

"There has been a great deal of collaboration and cooperation in that effort between the United States and the EU, as well as all the members of the G7, so we expect that effort to continue," he said.

Obama may also seek to patch up damage done to US-German relations by revelations concerning the widespread surveillance by the US National Security Agency (NSA).

Disclosures by whistleblower Edward Snowden revealed that the chancellor's mobile phone was tapped by the agency.

Merkel has previously warned that it will take "more than one trip" to repair the damage, despite reassures from Obama that she would not be the target of further US spying.

Other topics of discussion will be the Transatlantic Trade and Investment Partnership - a proposed trade deal between the US and EU, which it is hoped will be finalized by the end of the year.

Merkel, who touched down in the US on Thursday, will be in Washington for two days.

Her visit will include meetings with US Senators and the head of the International Monetary Fund, Christine Lagarde.

She is also scheduled to address the US Chamber of Commerce.