Merkel Backs Baghdad on Return of Iraqi Refugees | Germany | News and in-depth reporting from Berlin and beyond | DW | 23.07.2008 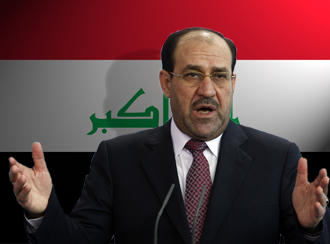 Al-Maliki got assurances from Merkel on the estimated 73,000 Iraqi exiles in Germany

Al-Maliki, who is on a trip to Germany and Italy this week to drum up foreign investment, was keen to present a new image of his violence-riddled country and invite European companies to invest in his country.

"Iraq has the foundation and is capable of taking the security situation into its own hands,"' al-Maliki told reporters at a joint news conference with Merkel on Wednesday, July 23.

"We can say with some pride that we're in the position and capable -- with our police and army and with our professional level -- to achieve that."

Speaking to reporters after talks with Chancellor Merkel in Berlin, al-Maliki said he also wanted to encourage the thousands of Iraqis who fled the spiraling violence in their country in recent years to return home without forcing them to do so. His government did not discriminate between Muslims and Christians, or between Sunnis and Shias, he added.

Merkel confirmed in a press conference that Baghdad had asked Germany to review its position on refugees. 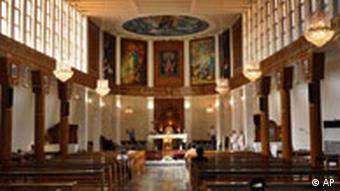 Germany wants to give preferential treatment to Christian refugees from Iraq

The Iraqi government has stated that the security situation is improving and that "it will adopt a program on the return of refugees within the next 60 days," Merkel said. "I think we should back plans to see the greatest number return home, with necessary encouragements," she said, adding that Germany would brief its EU partners on the Iraqi position at a meeting of interior ministers on Thursday this week.

The UN High Commissioner for Refugees estimates that more than 73,000 Iraqis live in exile in Germany, of whom half have been granted asylum.

Some 4.4 million Iraqis have fled their homes since the start of the war, with some two million currently living in neighboring countries, mostly Jordan and Syria, and some 2.5 million displaced within their own country.

Earlier al-Maliki met with more than a 100 business leaders in Berlin and the heads of several high-profile companies to convince them to invest in Iraq where al-Maliki said security had greatly improved. Violence in Iraq has dropped to its lowest levels since early 2004.

"German companies have a right to hesitate ... but we think we can persuade them in the coming days that the security situation allows them to return," Maliki told a press conference on the second day of a visit to Germany.

The Iraqi leader said he had invited the roughly 120 business leaders with whom he dined Tuesday to send representatives to study the situation. "They said they were prepared to do so," he added. "We are in control of the situation in the country and are ready to ensure extra protection" to foreign companies, he said.

Despite reservations by many German companies about the continuing political instability and sporadic violence in Iraq, al-Maliki managed to score a few successes.

Germany's Daimler AG signed a memorandum of understanding with the Iraqi government that could see the German vehicle maker supply buses, trucks and technological expertise in efforts to rebuild the country.

Daimler spokeswoman Ursula Mertzig-Stein told Reuters a small number of Daimler employees working out of an office in Baghdad will research what the car maker might be able to offer to help the country rebuild, and whether the company might be able to invest more broadly in Iraq.

Germany and Iraq also signed an agreement to promote and protect mutual investment. The accord signed by German Economy Minister Michael Glos and Iraqi Industry Minister Fawzi al-Hariri, guarantees "effective protection of property, free transit of capital and revenues and access to international arbitrage in the event of disputes," according to a statement issued by the economy ministry.

It demonstrated "both countries' wish to quickly promote investment," the ministry said.

Cooperation in energy and infrastructure

Merkel said she was glad German companies, which have long eyed lucrative contracts in oil-rich Iraq, had shown interest in al-Maliki's proposals.

"We are pleased that several German firms are already interested in taking part in the reconstruction of Iraq," Merkel said during a joint press conference on Wednesday. "The security situation in Iraq is improving step by step, that is the condition necessary for political and economic reconstruction," Merkel said. 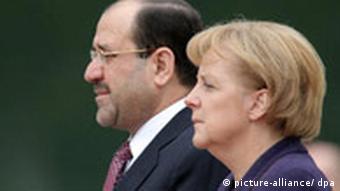 Merkel with al-Maliki in Berlin

The two leaders discussed cooperation in energy, infrastructure and training. Merkel said the presence of companies such as BASF AG's oil-and-gas arm Wintershall in Iraq could lead to more ventures involving German engineering and infrastructure expertise and a joint German-Iraqi training program.

Al-Maliki also told reporters in Berlin on Wednesday that his country and the United States are still in discussions about how long American troops will stay in the country.

The "negotiations are still ongoing," al-Maliki said, added that there could be a "big step forward on the principles of the withdrawal."

Al-Maliki this week told visiting Democratic presidential candidate Barack Obama he hopes US troops will be out of Iraq by 2010, though he didn't explicitly support Obama's plan to withdraw forces over 16 months.

Obama is scheduled to arrive in Berlin on Thursday, July 14 and will deliver a speech at a landmark in the city center.

In Berlin for talks with Chancellor Angela Merkel, Iraqi PM Nuri al-Maliki spoke to DW about how his battle-scarred country is getting back on its feet, and ready to welcome foreign companies. (23.07.2008)

Iraqi Leader to Visit Germany to Drum Up Foreign Investment

Iraqi Prime Minister Nuri al-Maliki is to visit Germany and Italy this week to encourage European investment in his country, a government spokesman said, adding that Iraq is now safe for business. (21.07.2008)