German Chancellor Angela Merkel has arrived in Afghanistan for an unannounced visit to meet Bundeswehr troops. The trip comes at a sensitive time for NATO forces in the country. 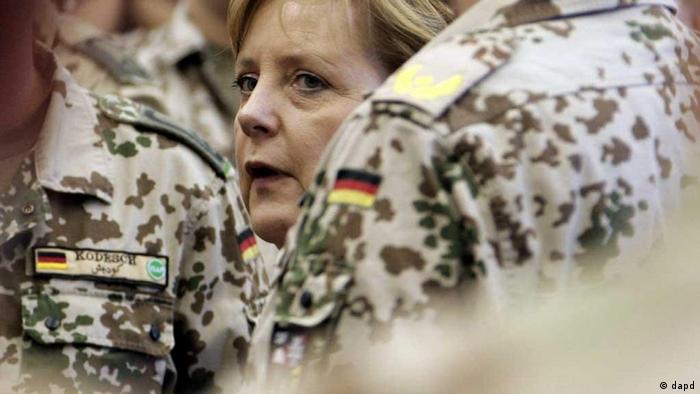 Chancellor Angela Merkel arrived at the Bundeswehr base in Mazar-e-Sharif on Monday morning for an unannounced visit to German soldiers serving there.

The chancellor - in the country to take a closer look at operations - had intended to first visit the restive province of Kunduz, but bad weather stopped her from landing there.

Merkel's last visit to Afghanistan was in December 2010, this being her fourth trip to the country. Germany's military is the third-largest contributor in terms of troop numbers to the NATO-led ISAF mission in Afghanistan.

Since the German military arrived in the country in 2002, the Bundeswehr has lost 52 troops in opposition attacks mounted against their installations, accidents or combat in the field.

There are currently some 4,800 German soldiers serving in Afghanistan, with plans to reduce the number by the start of next year.

It is expected that the ISAF mission will have fully withdrawn from Afghan soil by the end of 2014, with Afghan authorities set to take over responsibility for security matters.

The incident comes at a tense time for NATO troops, after a US soldier killed 16 civilians while they slept in their homes over the weekend. NATO has apologized for the deaths. Nine children and three women were among the fatalities.

That incident comes less than a month after soldiers burned copies of the Quran at a military base, sparking widespread, deadly public protests.