In an annual summer press conference, German Chancellor Angela Merkel has addressed the latest spy row with the US, the Malaysia Airlines crash in Ukraine and Israel's ground offensive in Gaza. 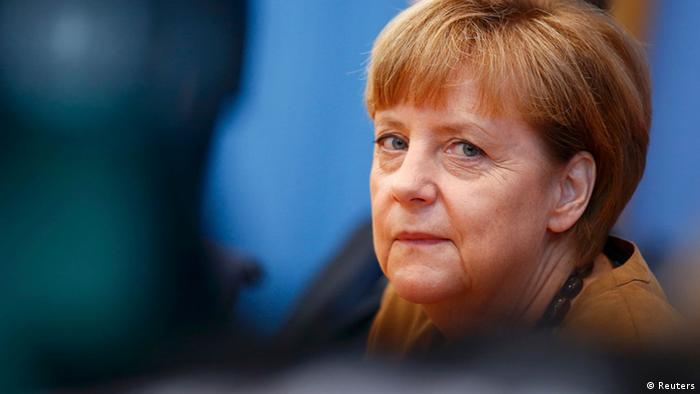 Chancellor Angela Merkel began her annual summer press conference on Friday by offering condolences to the families of the almost 300 people who lost their lives in the crash of Malaysia Airlines flight MH17.

The plane came down over eastern Ukraine on Thursday.

"Our thoughts are with the relatives of the victims," Merkel said. She also said she had earlier spoken via telephone with Dutch Prime Minister Marc Rutte to express her condolences on behalf of her government and the German people. More than 180 of the victims of the crash were Dutch nationals.

"What is important now is for an independent investigation to take place as soon as possible," Merkel said. "For that, a ceasefire is needed, and then it is of course crucial for those responsible to be brought to justice."

She also noted that there was a good deal of evidence to indicate that the plane had been shot down. She also called on the Kremlin to help bring an end to the fighting in eastern Ukraine between government forces and pro-Russian separatists.

"Events have shown there must be a political solution, and here it's all about Russia's responsibility for what is happening in Ukraine right now," she said.

"I can see no other way than to speak to Russian President Vladimir Putin," she added. "There are difficulties in the partnership, which we have to overcome."

Merkel also addressed the most recent US spying allegations, saying Germany wants "sensible talks" with Washington on the issue.

"Trust can only be restored through talks and certain agreements," Merkel said. "We will seek out such talks, though I can't announce anything concrete right now," she said adding that she doesn't expect "quick agreements."

Earlier this month, the discovery of two alleged US spies in Germany further stoked German anger at US espionage, prompting Merkel to demand the departure of the CIA station chief in Berlin.

The scandal first began last year when whistleblower Edward Snowden revealed that the US National Security Agency (NSA) was eavesdropping on Merkel's cell phone and conducting mass surveillance of German citizens. Washington has dismissed the idea of a "no-spy" agreement demanded by Germany since the reports surfaced.

However, in her speech Merkel insisted that Germany and the US remain close partners "and nothing about this will change."

The chancellor also dismissed the idea that her government would allow Edward Snowden to come to Germany.

"We learned things [from him] that we didn't know before, and that's always interesting," she said of Snowden's revelations, but added, "granting asylum isn't an act of gratitude."

Israel's right to self defense

The chancellor was also asked several questions about the Israeli offensive in the Gaza Strip in which more than 200 people have been killed over the past 11 days.

Merkel said it had become clear that the Islamist militant group Hamas was targeting the Jewish state with a "new quality" of weaponry and that any country that is attacked in such a manner must have the right to defend itself.