Chancellor Angela Merkel has said the Berlin attack demanded a swift response from the government that guarantees both security and civil liberties. She also called for faster deportations for failed asylum seekers. 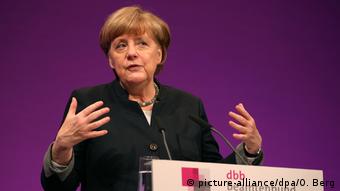 Speaking at an annual meeting of the German civil service association, or dbb, in Cologne on Monday, Chancellor Angela Merkel made reference to the terror attack at Berlin's Breitscheidplatz on December 19.

The attack, she said "urges us to act faster, to act correctly and to not just stop at announcements but also show where we stand."

Referring to the Cologne police's handling of security on New Year's Eve, she said the officers had behaved "correctly." The police's activities that day included targeted security checks on men of North African descent. There were also reports that the police referred to the groups of men using the acronym "Nafris," triggering a debate on racial profiling in Germany.

The chancellor also spoke of developing a consensus among political parties in Berlin and finding "common solutions" to classify Algeria, Morocco and Tunisia as secure states of origin, enabling German authorities to send back refugees coming from these countries.

Officials could decide on an application faster if they knew whether the asylum seeker came from a secure or a dangerous country, she added. Merkel also spoke in favor of faster deportations, but said it was important that a deal with the countries where these people were being sent back be negotiated "respectfully."

Deportations to Morocco, Algeria and Tunisia are currently complicated because the countries are not ready to take back citizens who have fled the country. Members of Merkel's party, the Christian Democratic Union (CDU), and its coalition partner, the SPD, are now demanding that the European Union reduce aid to these states if they refuse to change their stance.

No 'cherry-picking' in Brexit talks

Merkel also touched on the upcoming Brexit talks with the UK, after its citizens voted last June to leave the EU. Merkel said it was important that "we [the EU] also make clear on the other hand that access to the single market can only be possible on the condition of respecting the four basic freedoms. Otherwise one has to talk about limits [of access]."

British Prime Minister Theresa May had hinted in a television interview at the weekend at a "hard Brexit," in which border controls were prioritized over market access. Merkel responded by saying that negotiations could not be based on "cherry-picking."

Britain's partners in the 28-nation EU have said that limiting immigration would be incompatible with maintaining full access to the bloc's single market.