Merkel Accuses Mugabe of Damaging Image of Africa | Europe | News and current affairs from around the continent | DW | 08.12.2007

German Chancellor Angela Merkel called on European and African leaders on Saturday, Dec. 8, to push for a renewal of democracy in Zimbabwe, saying the world could not look on as democracy is "trampled underfoot." 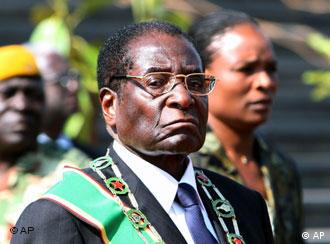 The situation in Zimbabwe and Mugabe's actions are harming all of Africa, Merkel said

"The current state of Zimbabwe damages the image of the new Africa," Merkel told the leaders of 26 European and 53 African states. "Because this is so, we must take the chance here, in this framework, to put all our efforts together into strengthening democracy."

Among her audience was Zimbabwe's President Robert Mugabe, who is regarded in Europe as having driven his country to political, agricultural and financial collapse. He has been banned from entering the EU since 2002, but the ban was waived for the summit.

Britain's Prime Minister Gordon Brown refused to come to the summit when Mugabe was invited.

But despite that boycott, "we, the whole EU, are unified in our assessment of the situation in the country," Merkel said. 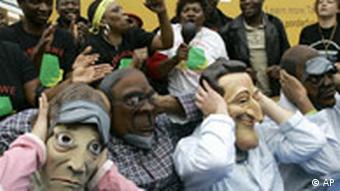 "Zimbabwe's situation concerns us all, in Europe as well as in Africa," she added. "We don't have the right to look away when human rights are trampled underfoot."

The chancellor said the EU's concerns included Zimbabwe's official annual rate of inflation, which stands at nearly 8,000 percent, as well as attacks on opposition figures ahead of elections set for next year.

"A democratic government in Zimbabwe, which respects human rights, will have the support of the European Union, with the aim of allowing Zimbabwe to become a new free and prosperous state," Merkel added.

While the session was behind closed-doors with only a copy of Merkel's speech being leaked to journalists, Ireland's Prime Minister Bertie Ahern said that Merkel's speech had made uncomfortable listening for Mugabe.

Merkel had expressed her concerns about the "deep political and humanitarian crisis in his country," Ahern told reporters.

Mugabe had been widely expected to respond to Merkel's speech, but in the event he did not react to it, Ahern said. The Zimbabwean president has blamed his country's economic woes on Britain, whom he accuses of failing to honor pledges to fund land redistribution and of inciting the opposition to exact regime change. 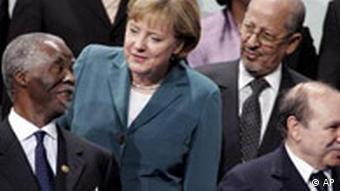 In a speech before Merkel on the issue of human rights, South African President Thabo Mbeki did not address Zimbabwe, where he has tried to mediate between Mugabe and his political foes.

Mbeki said the summit should work to ensure that Africa's "masses escape from the clutches of poverty."

"We are fully conscious of the fact that good governance and respect for human rights are fundamental to the achievement of this objective," he added.

Pressured by China's growing investment and influence in Africa, the Europeans hope to agree after the two days of talks to ambitious action plan with the continent to revitalize trade -- but also to improve cooperation in areas like immigration and peacekeeping.

Challenged by the past 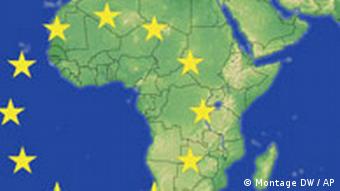 Europe's colonial past in Africa continues to strain relations

Portuguese Prime Minister Jose Socrates said history had "thrown down the gauntlet and challenged us to work together to write together a completely new page in the relationship between Europe and Africa."

"I think this EU-Africa summit is a milestone on the path to better relations between our two continents," Merkel said after her speech.

But the issue of Mugabe, seen by many in Africa as an independence hero, has underlined the difficult relationship between Africa and the former colonial powers, some of whom gave up control only a few decades ago.

"The real significance of this summit must be to lay the foundations of a new partnership based on mutual respect," said John Kufuor, president of Ghana and current chairman of the African Union. "Europe needs Africa as much as Africa needs Europe."

Almost 80 European and African leaders gathered in Lisbon on Saturday, Dec. 8, starting two days of talks aimed at creating a new alliance between the continents. But animosity over colonial rule could derail the talks. (08.12.2007)

Despite a desire to do more business with Africa, Germany's Chancellor Angela Merkel insists that she will not keep quiet about human rights concerns at an upcoming Europe-Africa summit. (07.12.2007)

A group of well-known European and African writers criticized leaders from the two continents for not addressing the situations in Zimbabwe and Darfur at an upcoming bilateral summit. (04.12.2007)

Do you think the EU-Africa summit will lead to a real change in relations? Send us your comments and please include your full name and country in your reply.

The EU looks at boosting semiconductor trade with Taiwan 02.06.2022

Hungry for chips, the EU hopes to tap into Taiwan's semiconductor and microchip industry. Fresh talks with Taipei come amid tense relations with China though, which regards Taiwan as a breakaway province.

Brussels is seeking to warn Beijing about supporting Russia's invasion of Ukraine — and to use its influence to stop the war. Some experts, however, are skeptical about what can be achieved during the EU-China summit.