The Mercedes driver stepped out of his car only one point behind Ferrari's Sebastian Vettel in the championship. Hamilton celebrated by leaping into the crowd and being held aloft by fans. 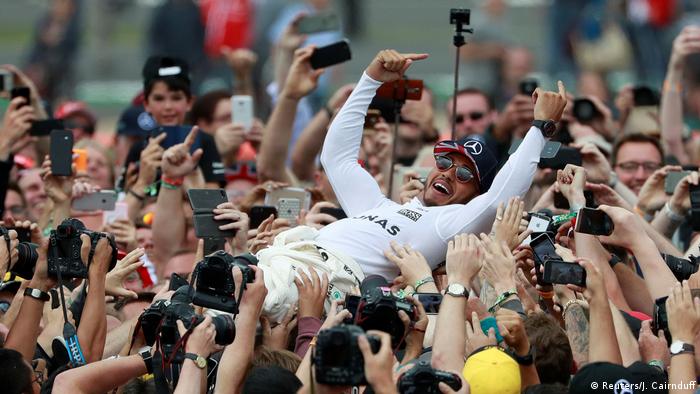 Mercedes celebrated the victory of its driver Lewis Hamilton at the British Formula One on Sunday.

Team boss Toto Wolff said Hamilton had answered his critics with his fourth victory in a row at Silverstone and fifth there in total. It was the 70th Mercedes win in Formula One.

The triple world champion had been booed by some and condemned by others after he snubbed a Formula One promotional event in London in favor of a holiday in Greece. He led every lap from pole position to chequered flag, closely followed by Mercedes teammate Valtteri Bottas in second.

"There is no reason to question my preparations," Hamilton said. "(There was) so much negativity trying to pull the weekend down but obviously it had no effect ... the fans were out-and-out loving and supporting all weekend."

The official Mercedes Twitter account was breathless in its celebration of its team's victory, calling Hamilton Mr Silverstone.

Hamilton celebrated his win with a triumphant crowd surf, leaving an empty seat at the podium.

Hamilton also set the fastest lap and stepped out of his car only one point behind Ferrari's Sebastian Vettel at the halfway stage in the season.

"I think that sometimes he just needs the right impulse to extract maximum performance," Wolff told reporters. "I think maybe that is an answer to the critics."

"I still don't understand why the British hero is being beaten up before the grand prix. It probably made him even more determined to show his fans how he can drive. And he can drive," added the Austrian.

Hamilton now has 57 wins and 67 poles, one short of Michael Schumacher's all-time record.

Mercedes driver Bottas, who went from ninth to second to complete the team's second one-two of the year, congratulated his team on the victory.

"I'm really happy today, It was not an easy race to start from P9," said the Finn. "The team did a perfect strategy and I just kept my head down. It's a perfect weekend and well done to Lewis."

Hamilton's victory slashed a 20-point lead from Ferrari's Sebastian Vettel, who was still third entering the penultimate lap, but suffered a front-left blowout, which pushed him into seventh place.

James Allison, Mercedes Technical Director, said the team was building momentum for the race in Hungary in two weeks.

"This is a sport that asks so much of the people who compete in it, drivers and teams alike, and it is on days like these that it repays every tiny bit of effort one hundred fold," Allison said in a statement. "They are beyond description in the degree of pleasure, satisfaction and joy that they bring us all."