Memorize the periodic table? Why bother?!

Kids these days … can't even be bothered to memorize the periodic table. It used to be what separated the kids from the adults. But young chemists today say, "what's the point?" And they've got a point. 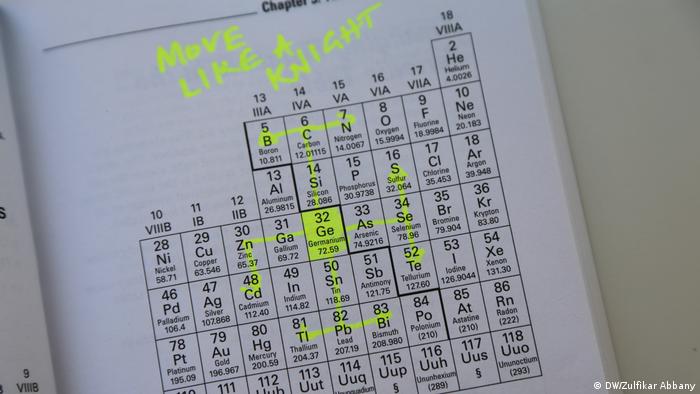 A colleague of mine in Berlin is a chemist. And I'm sure dear Klaus won't mind my mentioning that he's a little older than me, probably by a good 20 years, because it's relevant to this story.

When Klaus was a student he was told to imagine the periodic table as a chessboard, and the question was this: if you're a knight, standing on Germanium (Ge), where could you land?

Well when I hit the streets of Lindau in search of young chemists willing to take up the challenge, I was astounded by the rate of failure. The town is heaving with more than 400 scientists from around the world for the 67th Lindau Nobel Laureate Meeting. It's a meeting of young scientist and Nobel Laureates, as you might guess. So it's the cream of the crop.

But the best anyone scored was two out of a possible seven elements: Boron (B), Nitrogen (N), Sulfur (S), Tellurium (Te), Bismuth (Bi), Thallium (Tl), and Cadmium (Cd).

One or two young scientists got Nitrogen, and one got Cadmium. But more often they landed nearby on Silicon (Si), Phosphorus (P), Tin (Sn), Selenium (Se), or on Lead (Pb).

They didn't seem to mind - only a few were slightly embarrassed.

It seems the best way to memorize the periodic table is simply to remember where you last put it, because young scientists these days don't bother to memorize it at all. And teachers and lecturers don't expect it of them either. 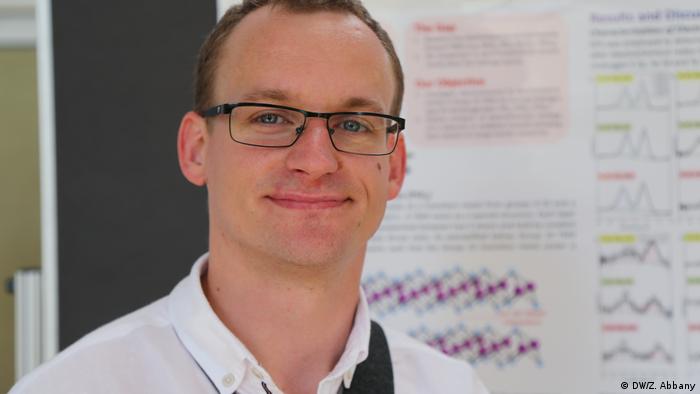 Sosič: "Things aren't like they were 150 years ago. There is so much data now and it's all on the internet."

"The main thing is getting students to focus on reliable information," says Izidor Sosič, a lecturer and researcher with the University of Ljubljana. "Everything is on the internet, and of course we get spoilt, but if you use it well, knowing how to use the reliable data can advance your work, and that doesn't include memorizing things that are readily available."

"I learnt everything in Chinese. And the pronunciation in Chinese is much simpler. For example, calcium is 'gai' - just one syllable. So it's simpler to memorize in Chinese. It's much more complicated to write. But it wasn't too hard."

Okay, I say, so if you were standing on Germanium … and that's as far as I get, because Jiang interrupts me with a halting, "I don't know where germanium is!" She can hardly stop laughing until she says, "But I do know what it is."

"It's a common impression people have about chemistry, that you have to memorize things," says Jiang. "But for me it's more about understanding things."

It's easy to get the logic - that understanding the properties is more important than being able to visualize where the elements are located on the periodic table. Mothika: It's better to learn how the properties change, rather than randomly learning the elements in their boxes

But perhaps there's another point to moving around the periodic table like a knight in chess. Could it exercise your brain to think around corners?

Not for those I asked at Lindau. Dr. Venkatasuresh Mothika is a young scientist from India, who is currently with the University of Wuppertal in Germany. I asked him to move like a knight as well.

Then he's off again, squirrelling around the noble gasses, but he's lost the plot.

"You could have asked me direct numbers, because it's difficult to imagine these boxes. That's hard!" says Mothika. From school age to college, Mothika says he would learn the properties of the elements in their groups or columns, because "they are mostly related in their chemical properties."

"So like carbon, silicon, germanium," he says, "their sizes increase and they have similar properties. That's the best way to remember them, rather than just randomly."

All in the numbers

And you go via the column or rows. Israeli scientist Raphael Alhadeff is currently with the University of Southern California. He says you might visualize the first few rows, the "tiny ones," like Hydrogen (H) and Helium (He), but you wouldn't see the rest as a picture. 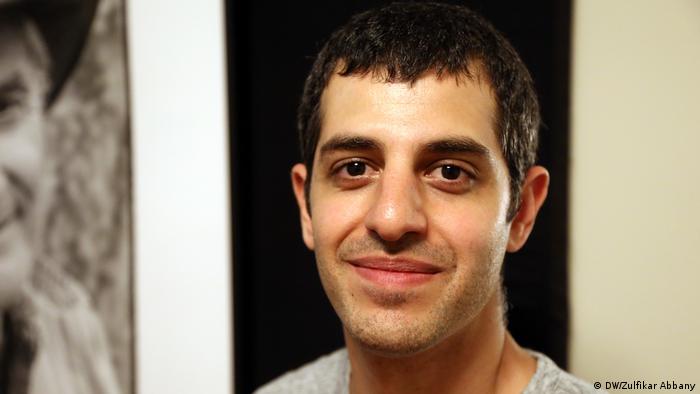 Alhadeff: You don't need a photographic memory to be a chemist

"We know how many bonds they make and through that we know their numbers," says Alhadeff. "So for example I don't think of nitrogen as just nitrogen. I know nitrogen has five electrons, so for me nitrogen is the fifth. After that comes oxygen, then fluorine and neon."

Because they have six, seven and eight electrons, respectively. So if you think of the numbers, you can place them in their row. But you can also build up the columns.

"I know that below oxygen it's sulfur, because I know how many bonds it makes and that it's the same as oxygen, or how many free electrons it has," says Alhadeff. "It gets a little more complex than that, but the same as you'd count to ten, and then continue with 11, 12, 13 etcetera, we do the same in chemistry." Ryojun Toyoda of the University of Tokyo, pictured centre, learnt the periodic table with a song. And he did the best. Three out of seven.

It's amazing hearing Alhadeff reel off the elements, using his numeric method, because it clearly works. When I asked whether he had ever had to memorize the periodic table just like that, he says "of course not. They might do it in some countries, like in Asia, and they used to do it Europe, but we didn't do it."

And yet playing the chess game, he failed miserably.

Stay in your neighbourhood

There is another reason you might not want to memorize the entire periodic table and that is that you'll probably never need it. An organic chemist might only need to know five or ten elements, while inorganic chemists might focus on thirty. So, again, what's the point in knowing them all?

But if you do still want to learn it all off by heart, you could try the Japanese method - learn it by song.

"In Japan," says Ryojun Toyoda of the University of Tokyo, "we have a song that starts with hydrogen, and it contains all of the elements."

There's one in America too: the Element Song by Tom Lehrer. But it has to be said, the melody is a bit poor. So how anyone can remember it is beyond me.

Heads up! Nobel Laureates leave a trail of science in a small town called Lindau

There's a simple art to learning from pylons rather than walking into them: look up! Nobel Laureates gravitate towards Lindau every summer. The town's newly erected Science Trail is a tour of their minds. (29.06.2017)

Unspoken truths about objectivity and science

Science sits on a pedestal of purity - and we put it there. But there are some uncomfortable truths about its handling of alternative facts and who gets to say what, says DW's Zulfikar Abbany. (27.06.2017)

Lindau Nobel Laureate Meeting 2017: There is no alternative to science!

Last year it was Brexit. This year it's fake news, post-truth and alternative facts. There's a predictable sense at the 67th Lindau Nobel Laureate Meeting that scientists have to fight back. The question is how. (26.06.2017)