Rachel Stewart answered your questions in the latest Meet the Germans livestream. Catch up on the best bits here. 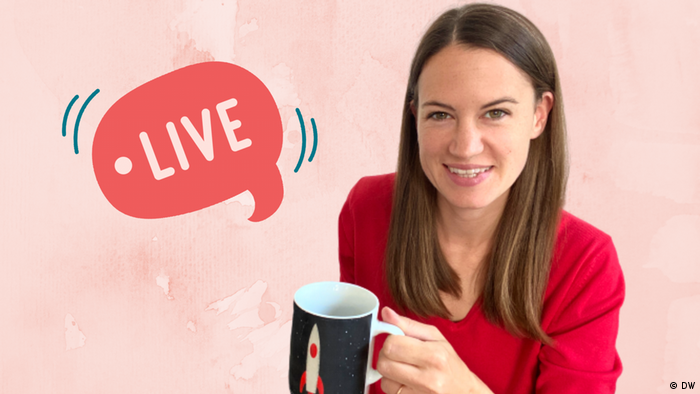 Thank you to everyone who joined Rachel for the first Meet the Germans YouTube livestream of 2021. Below are a few of the highlights — and you can catch the whole video here.

Where do Germans typically go on a date and who pays?

It's not unusual for a German to suggest going bouldering or for a walk or even a hike. Something active is definitely a good idea. And if you're going to a restaurant, it's so normal to split the bill. Therefore it wouldn't be a bad sign if you were on a date with a German and, at the end, they asked for the bill separately. It doesn't mean they don't like you!

What do you think of traditional Cologne food, like 'Himmel un Ääd'?

I'm now vegetarian, so I wouldn't eat that anymore. If I remember correctly, it's mashed potato and apple sauce with black pudding, or "blood sausage." I think, sadly, now that I've gone veggie, a lot of very traditional German food is no longer on the menu, so to speak.

What do you think about the debate on gender-neutral language in German, from the perspective of a German learner?

If you're talking, for example, to a group of people who are not necessarily all men, should you use the "generic masculine" to refer to everybody, or should there be another way of doing it? Some people use the "Binnen-I," which is an upper case "i" in the middle. It kind of combines the masculine and feminine forms (e.g. "KollegInnen"). Some people use an asterisk, which I've read is supposed to be even more inclusive because it's not necessarily just including people who identify as male or female (e.g. "Kolleg*innen"). Then there's the colon version, where you put a colon (:) before the feminine ending (e.g. "Kolleg:innen).

So there are a few different methods and I think that's the most difficult thing for a German learner – that there's not one go-to way of doing it. But, in terms of it being too confusing for a German learner overall, I would almost argue it could be easier for us! Because instead of having to say: "Hello male colleagues and female colleagues," which is the long, wordy alternative, you just have one word that communicates that you're talking to everybody.

What's your point of view about hiking?

Did fax machine usage in Germany increase during the coronavirus pandemic?

I hope not! The plan before the pandemic was certainly that it was supposed to be winding down. I think the German parliament even said that they were going to be getting rid of the fax devices in the ministries. It will be interesting to see whether that's actually happened. With digitalization as a whole, it's going to be so interesting to see how far it's gone and how much of it sticks.

Who will win the German election?

If I knew that answer to that, then I would place a bet! It's so interesting this year just because, whatever happens, there's going to be such a change after nearly 16 years of Angela Merkel being in charge.

There are some issues that are always important in Germany, such as education or pensions. Pensions aren't a very exciting topic, you would think, but it's really important here because the voting population is quite old.

For more insight into German elections and politics check out the latest Meet the Germans episode on YouTube and join Rachel live on Instagram (@dw_meetthegermans) on Wednesday 22nd September at 5:30pm CEST.

As hard as German might sound to some, once you learn the quirks of the language, you might just get hooked. Here are some phrases using "hope."